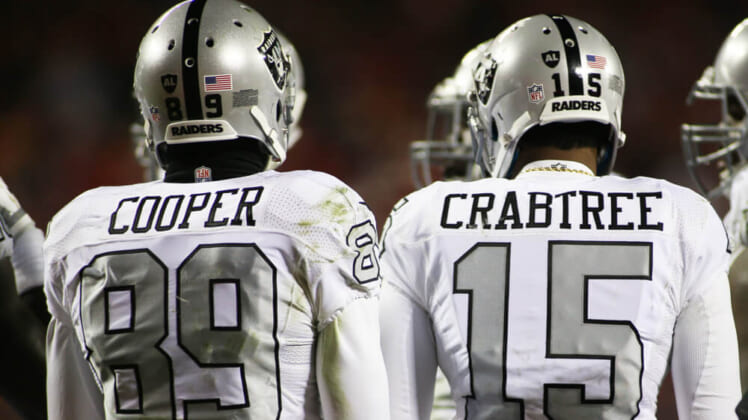 So far in the NFL tampering period, wide receivers are cashing in. The market for their services is off the charts and may mean the Oakland Raiders need to look inward vs. outward for performance at wideout.

It’s early but the numbers are mind-boggling.

Add in one of our favorites – Allen Robinson who signed a three-year, $42 Million deal with the Chicago Bears – and the pool is shrinking for now.

Former Bills WR Jordan Matthews is reportedly a target of the Raiders.

In no way am I saying to panic, like I’ve seen many Raiders fans do the past 48 hours. There are still roster moves to be made as we hit tomorrow’s 1pm PT official opening of the free agent window. There could be guys available that would be appealing to Reggie McKenzie and Jon Gruden and there’s still a few players who haven’t signed. Green Bay Packers standout Jordy Nelson and Jordan Matthews, who has been reportedly a target of Oakland, are still out there.

Either way, with the market the way it is, the last few days cement in my mind the Raiders would be best served bringing Michael Crabtree back for another season. What we don’t know is just how much the relationships between the veteran receiver and his teammates has deteriorated due to last season’s dysfunctional coaching staff and disappointing results. Some say it may be past the point of reconciliation while others argue it can be salvaged or that there is no issues.

If talk of discord and anger between Crabtree and his teammates is nothing more than exageration, keeping him in the Silver and Black not only makes sense from a need and talent perspective, but also from a financial one.

Crabtree is set to make $7.7 Million for the 2018 season. That includes a roster bonus of just under $500,000 and a workout bonus of $250,000. With the money being – excuse the pun – thrown at wide receivers thus far, Crabtree is one helluva bargain at under $8 Million a season. Website Sportrac estimates Crabtree’s market value to be over $10 Million a season. He still has two years left on his current deal making him an unrestricted free agent the year the Raiders will move to Las Vegas.

With the need for more depth at the position, and with heavy needs on the defensive side of the ball, Crabtree’s return makes the most sense. That does not mean the Raiders couldn’t trade Crabtree if the right offer and the right talent came in return.

The current market for wide receivers is quickly escalating outside the Raiders budget range.

Crabtree remaining in Oakland under Gruden could have been the answer all along.