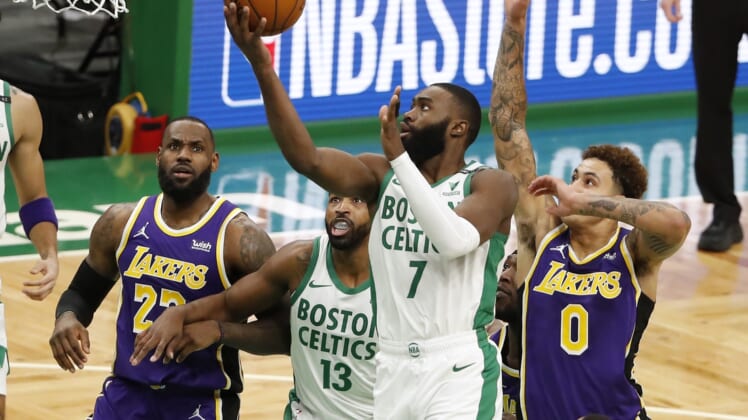 The Boston Celtics will have to deal with Stephen Curry without one of their primary stoppers Tuesday night when they visit the Golden State Warriors in San Francisco.

The Celtics have lost two in a row, including 96-95 at home to the Los Angeles Lakers in a national showcase game Saturday night.

Even more of a setback was the loss of defensive whiz Marcus Smart, who suffered a strained left calf in the fourth quarter against the Lakers. An MRI taken Sunday revealed a Grade 1 tear, leading the Celtics to say he could miss upward of two weeks.

He definitely will miss the club’s entire eight-day, five-game Western swing that includes marquee matchups with the Los Angeles Clippers on Friday and Utah next Tuesday.

“Marcus is essential to our team man. He’s been great,” Jaylen Brown gushed after Saturday’s game as the team awaited news on the severity of the injury. “Whether the numbers show it or not, Marcus has been a leader on this team. He’s been somebody that has been looking to get guys the ball in the right spots, including me. So to have him go down in the middle of the game like that definitely had everybody concerned.”

Compounding the problem is the absence of impressive rookie Payton Pritchard, who suffered a sprained right knee last Monday. He isn’t expected back until the Celtics return home.

That leaves Kemba Walker and Jeff Teague as the primary defenders on Curry, the NBA leader in 3-point field goals who is also sixth in the league in scoring (27.7 ppg).

Curry missed both of the Warriors’ losses to Boston last season, so he’s never faced Walker as a Celtic. But their matchups when Walker played for Charlotte often produced fireworks, with Curry going for 30 or more points in three of the last six meetings, including games of 39 and 40.

In 12 career head-to-heads with Walker, Curry has averaged 28.1 points, shooting 51 percent overall and 47 percent on 3-pointers, averaging 5.1 threes per game.

Curry had 38 points the last time he matched up with Teague as a member of the Minnesota Timberwolves in 2018.

The Golden State standout contributed 28 points to a 118-91 home win over Detroit in the Warriors’ most recent game Saturday. The Warriors will be looking for a second consecutive victory for the sixth time this season without ever having won three in a row this season.

Curry declared after Saturday’s win that he’s just warming up.

“It follows my normal patterns of shooting better as the season goes on in general,” he said. “Definitely getting a lot more comfortable finding that balance knowing what types of shots I am going to get. Knowing what I can take and make. I don’t ever lose confidence in that respect, but you start to get a flow and carry that from game to game and you start to feel really good.”

With the Celtics having made their annual trip to San Francisco in November last season, it’s been almost 15 months since Brown, a former University of California star, enjoyed a Bay Area homecoming.

The Pac-12 Freshman of the Year in his one season at Cal has exploded into a major offensive force since last seen by his college fans, having scored 20 or more points in 10 straight games and 18 or more in all 18 contests this season.