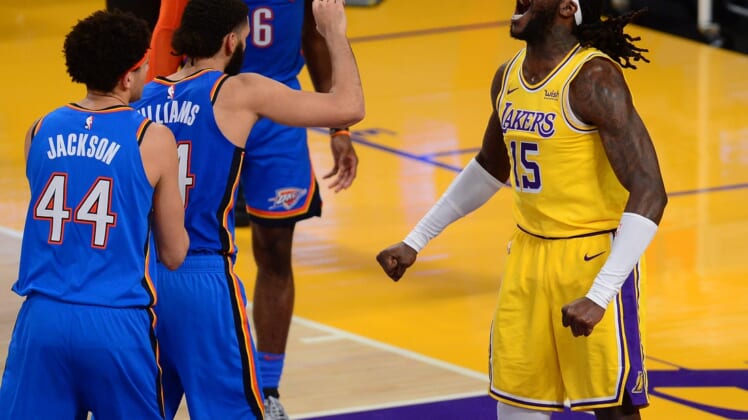 The Los Angeles Lakers’ worst fears were alleviated Monday when Anthony Davis’s MRI revealed no rupture of his right Achilles tendon, but they will miss him for perhaps a month as they return to the court Tuesday night in Minneapolis to face the Timberwolves.

Davis underwent an MRI on Monday in Minneapolis that revealed a calf strain and an aggravation of his right Achilles tendon. Davis is expected to get another evaluation upon his return to Los Angeles but isn’t expected to return to the Lakers’ lineup until after the All-Star break ending March 10.

“I’ve kind of just been dealing with my whole career, just having the injury bug,” Davis said after the game. “Something minor, it’s fine. I’ll go out there and play. But this injury is a little different because it’s an Achilles.”

Davis, who missed two games last week, had returned on Friday against the Grizzlies and finished with 35 points and nine rebounds in 35 minutes. Davis scored 15 points and grabbed four rebounds in 14 minutes before exiting the game Sunday.

“I felt great coming back the first time against Memphis, and I’m gonna do the same thing, the same steps to get it back right,” Davis said. “Obviously, be a little more smarter with it, like I was smart the first time, but even more smarter. Up the treatment more — instead of three times a day, maybe five times a day just trying to get it back where it needs to be done out there and help the team.”

Davis’ absence once again moves Kyle Kuzma into a starting role and likely more minutes for Montrezl Harrell as well. Kuzma has averaged 14.3 points in six starts so far this season. Harrell is averaging 13.2 points in 24.8 minutes per game off the bench and scored 21 and 20 points in the two victories over OKC last week that Davis missed.

Kuzma finished with 19 points on 8-for-12 shooting and had eight rebounds against Denver. He heads into a tough matchup against Minnesota’s resilient center Karl-Anthony Towns, whose 20 points and 11 rebounds helped the Timberwolves snap a four-game losing streak Sunday against the Raptors.

In the three games since Towns returned from a 13-game absence following a positive COVID-19 test, he is averaging 21 points and 9.7 rebounds and shooting 56.8 percent.

“Playing with KAT, it’s easier, because when he gets the ball, I can cut off him and things like that,” Malik Beasley said recently. “Where if he’s not in the game, or D-Lo is not here, I have to get the ball moving. Either way, I’m happy with him on the court and ready to get some wins together.”

Beasley’s emergence as another offensive option has been a huge plus as well.

Beasley, who shot 6-for-10 from 3-point range and finished with 20 points on Sunday, is averaging 24.6 points per game in seven games this month.

Minnesota guard D’Angelo Russell (sore left leg) will be out for the fourth consecutive game and guard Jarrett Culver (left ankle) is expected to miss his 12th game in a row.