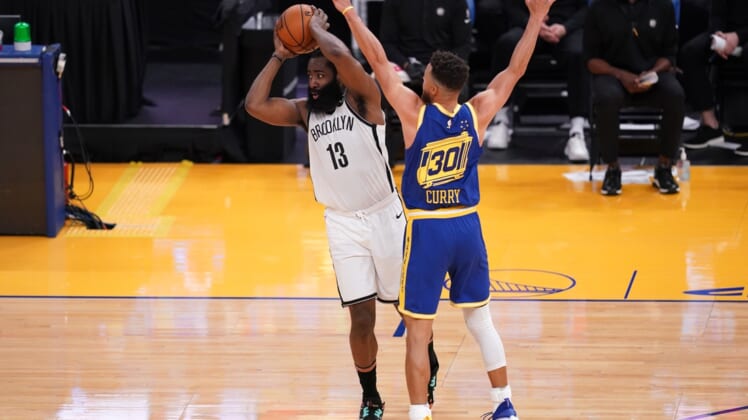 Kyrie Irving approached James Harden in the middle of last week to tell the recently acquired star that he was now the team’s point guard.

Harden surely made that clear with his passing in Brooklyn’s most recent game, and he will look to rack up another hefty amount of assists when the Nets visit the Sacramento Kings on Monday night.

The third member of the team’s star trio, forward Kevin Durant, will miss at least the next two games due to a strained left hamstring.

Durant suffered the injury while scoring 20 points in Saturday’s convincing 134-117 road win over the Golden State Warriors — a contest in which Harden made several dazzling passes while posting 16 assists. The output was his highest in 14 games with the Nets since being acquired from the Houston Rockets.

Irving said there wasn’t much to the conversation with Harden about defining the roles.

“I just looked at him, and I said, ‘You’re the point guard, and I’m going to play shooting guard,'” Irving said. “That was as simple as that.”

Irving was established as the point guard prior to the trade. Upon arrival, Harden made it known he was fine with whatever role was needed.

The gesture by Irving to acquiesce to Harden could prove beneficial, with the Nets expected to be one of the leading Eastern Conference contenders throughout the season.

And with Harden averaging 11.6 assists since joining the club and Irving averaging exactly half that amount (5.8) for the season, it could prove to be a move where both players flourish.

“We were all fine with it,” Harden said. “For me, as a point guard, I try to get guys shots, and then obviously knowing where guys like the ball at. Kyrie’s an unbelievable scorer. He can score from anywhere on the floor, so just making sure he’s involved, and he does a good job of getting involved anyways.”

Irving scored 23 points on 10-of-17 shooting in the easy win over Golden State. Harden tallied 19 while making 5 of 8 from 3-point range.

The Nets will be aiming to defeat the Kings for the fifth straight time when they take the court for the second contest of a five-game road trip.

Sacramento is 0-3 on a five-game homestand after Sunday’s lackluster performance that resulted in a 124-110 loss to the Memphis Grizzlies.

“We didn’t play with enough effort to win the game,” veteran reserve Cory Joseph said after matching his season high of 16 points.

The Kings scored the game’s initial basket and never led again as Memphis controlled the contest.

The three straight defeats come after a stretch in which Sacramento won seven of eight games.

But suddenly, the Kings have regressed and allowed an average of 122 points during the swoon.

“You have to play this game every single night at a certain level,” Sacramento coach Luke Walton said. “We’re still learning that lesson, and it can be painful at times.”

Star point guard De’Aaron Fox (knee) returned from a one-game absence to record 23 points and nine assists for the Kings.

Sacramento rookie Tyrese Haliburton scored 22 off the bench for his third 20-point effort over the past six games. He made 3 of 6 3-point attempts and is 20 of 36 from long range during the stretch.

However, Buddy Hield (2-for-10 shooting) and Harrison Barnes (2 of 6) both tallied just eight points.

Sacramento forward Marvin Bagley III (calf) is day-to-day after missing the past two games. His availability will be determined on Monday.