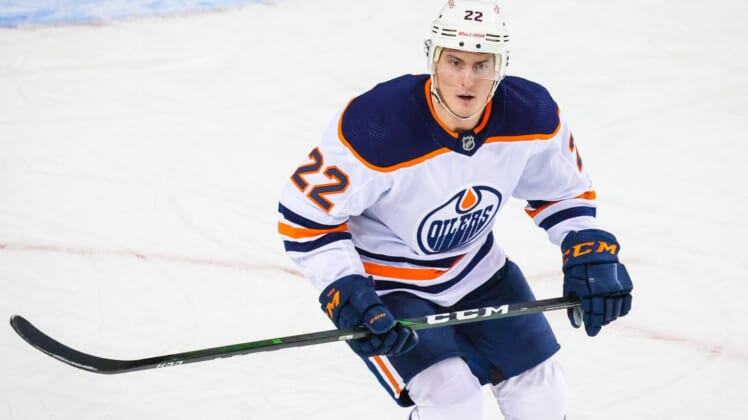 The Winnipeg Jets and Edmonton Oilers won’t be battling just for the second spot in the North Division when they meet on Thursday. The winner also will move into a tie with the Toronto Maple Leafs atop the all-Canadian division.

It’s shaping up as quite the showdown. The visiting Jets are coming off a roller coaster 4-3 overtime win against the Montreal Canadiens on Wednesday thanks to Nikolaj Ehlers’s goal after they blew a two-goal, third-period lead. Meanwhile, the Oilers look to build off a 7-3 beatdown of the Calgary Flames on Wednesday.

“They’re a really complete team,” Oilers defenseman Tyson Barrie said of the Jets. “It’s a good test for us … see where we match up. It’s going to be a big finish for all these teams in the division. It’s kind of crazy. Every night feels like a playoff game.”

The Oilers snapped a two-game skid with a dominating performance in Calgary in which they turned a 3-1 lead after two periods into a 7-1 edge before coasting to the finish.

“It’s pretty incredible the skill we have on this team. It’s world-class, as good as it gets,” Barrie said. “I think we played the right way the whole game. We talked between the second and third (periods) and we wanted to have a great start to the third, not give them any life.”

To no surprise, Edmonton’s dynamic duo of Connor McDavid (one goal, two assists) and Leon Draisaitl (three assists) were major factors, but Barrie also was an offensive force. He tied a career high with four assists, and he leads all NHL defensemen with 28 points.

“We’ve had solid defensemen, but nobody with the offensive instincts he has,” coach Dave Tippett said of Barrie, who has ignited the club’s power play. “I give him a lot of credit. He’s a solid, veteran guy, didn’t want to push his way in, got a feel for what was going on and a feel for our team and (is) having a really good season.

The Jets are also winning thanks to their forward strength. Ehlers and his linemates, Kyle Connor and Pierre-Luc Dubois, combined for three goals and four assists in the Wednesday victory.

“We’re building,” Ehlers said of the trio. “It’s still new for us. I haven’t played with K.C. a lot during our six years together, and with Dubie … we’re building and it’s going the right way. It’s very exciting.”

Dubois, who was acquired via trade from the Columbus Blue Jackets early this season, has been trying to find a groove with the Jets, but his three-assist outing against the Canadiens is a good sign Winnipeg has found a combination for him.

“Because we have three really unique players in some ways, it’s going to take them a little time to find each other and to find the rhythm of who is going to the net,” coach Paul Maurice said. “They’re dynamic with that speed on the wings and Pierre-Luc’s size. We think there is a lot there, it will just take some time.”

The Jets have a 5-3-1 record since the start of March, and they know they must elevate their play against the Oilers on Thursday. Maurice is counting on the team’s depth to make the difference.

“When you look at the numbers from (Wednesday’s) minutes, to have a fourth line that can play at the three-minute mark of the third period with the goalie out, in transition on that shift and be real strong and valuable, that’s held everybody’s minutes,” Maurice said. “We should have some good legs for (Thursday’s) game.”