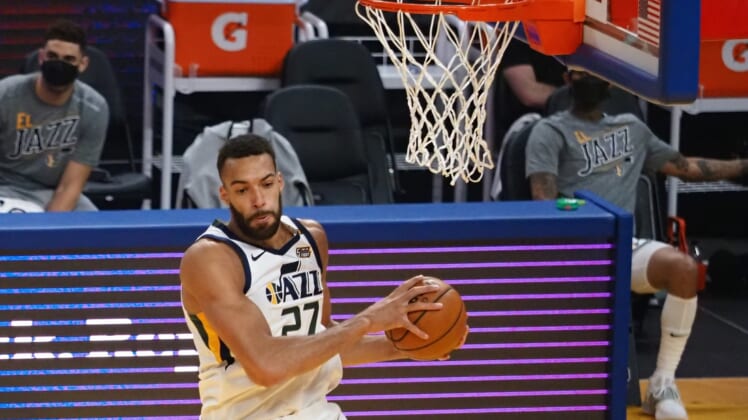 The Utah Jazz are looking to rediscover their top form heading into a Thursday clash against the host Washington Wizards.

Utah was on a 22-2 run before losing four of its past seven games, though the Jazz are coming off a Tuesday road win over the Boston Celtics.

Washington will hope to bounce back from a 121-119 loss to the visiting Sacramento Kings on Wednesday.

The Jazz still own the NBA’s best record, 29-10, thanks to their ability to overwhelm opponents from the perimeter and lock them down on defense.

Rudy Gobert is the primary catalyst driving both parts of the equation. Gobert is averaging 18 points, 17.7 rebounds and 4.7 blocks over his past three games, all increases on his season norms of 14.5, 13.5 and 2.9, respectively.

“One of the things, when we’ve talked about Rudy, is his activity — his ability to do multiple things on defense and to make multiple effort plays,” Jazz coach Quin Snyder said. “And when we’re solid with the other four guys that are on the court, he has a chance to be even more impactful.”

Gobert posted 16 points, 12 rebounds and four blocks to help lead the Jazz past Boston 117-109 on Tuesday. That followed a 24-point, 28-rebound performance against Golden State in which he set a single-game franchise record for rebounds.

His ability to pressure the rim on offense opens up the perimeter, and his ability to alter or block shots forces opponents into taking tough shots on numerous possessions. Gobert, a two-time NBA Defensive Player of the Year, has a reputation as a shot-blocker but feels as if his defensive game is much more nuanced than that single stat.

“The funny thing is, I don’t want to chase blocks,” Gobert said. “I’m just going to keep being active, keep making sure I make the right decisions, and if guys are going to keep challenging me, I’m going to be there to block their shots.”

Washington is the latest opponent tasked with the dilemma of how to game plan against Gobert.

The Wizards are going in the wrong direction ahead of their matchup with Utah. Washington has lost five straight games and seven of the past eight, allowing at least 125 points in five of those defeats.

The latest setback was especially painful. The Wizards rallied from an 11-point deficit and tied it up in the final minute on back-to-back layups from Russell Westbrook, only to see De’Aaron Fox score the game-winning jumper with 1.3 seconds left.

Washington’s subsequent play ended in the team’s 15th turnover of the night, with those giveaways resulting in 26 Sacramento points. The Wizards also were unable to overcome 4-of-25 shooting from 3-point range.

“We’ve got to be better from the 3-point line, and we’ve got to take care of the ball,” Washington coach Scott Brooks said. “It seemed like every turnover we had led to a break. You do make a mistake, you’ve got to get back and keep that turnover down to a little over a point per turnover, not almost two.”

Generating offense generally hasn’t been the problem for the Wizards. Westbrook produced his second triple-double in five games since the NBA All-Star break on Wednesday, ending the night with 26 points, 14 rebounds and 10 assists.

Bradley Beal, the NBA scoring leader at 32.2 points per game, has averaged 26.5 points over the past four contests while dealing with a sore knee. He put up 29 points against the Kings.