PREVIEW: Washington Capitals return to action after a week, travel to Pittsburgh 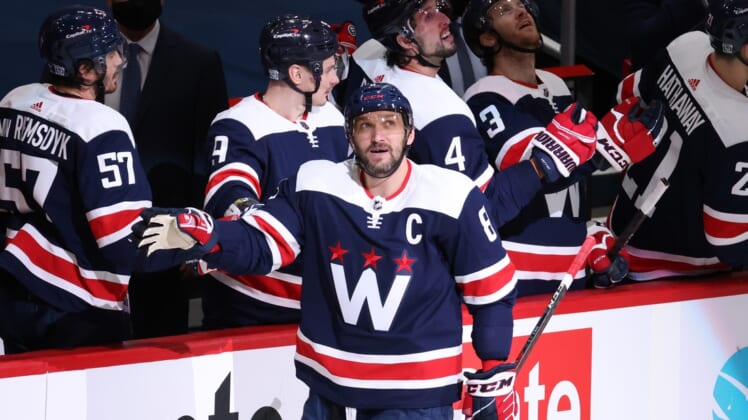 The Pittsburgh Penguins and visiting Washington Capitals have had a lot of down time recently heading into their game Sunday.

The Penguins’ 4-3 shootout win over the New York Islanders on the road Thursday came after a four-day layoff and was just their third game in February because of postponements due to opponents’ COVID-19 protocol issues.

Washington has been off since last Sunday’s 7-4 loss to Philadelphia because of three straight postponements related to the same protocol issues.

That means the Capitals have had to sit for a week on a three-game losing streak, with their last win coming Jan. 30, a 4-3 shootout decision against Boston.

Winger Tom Wilson said Washington was able to “look at the systems in more detail and learn and do video (analysis) and go out and practice hard and stay in shape and take care of the body.”

It’s all part of an unfamiliar landscape.

“It’s been a weird year — obviously ups and downs, guys in and out of the lineup,” Wilson said. “That will probably be a theme for the whole year, but it is good timing for us to reset, focus on our game, get some key guys back and get other guys back who are nursing some things.”

After missing several players in recent weeks because of injuries or being on the NHL’s COVID protocol list, by the end of the week Washington was practicing with no absences, and coach Peter Laviolette said he expects his team to have a “full complement of players” available for Sunday.

“It’s nice to see when everyone’s back and healthy,” Capitals center Nicklas Backstrom said. “Hopefully, we can reset here and go from there.”

The matchup — in addition to being between longtime rivals and featuring Capitals star Alex Ovechkin and Penguins star Sidney Crosby — carries an interesting dynamic.

Washington has had a difficult time holding leads, including blown leads in two of its three games in the losing streak. Pittsburgh, conversely, has notched just one of its six wins in regulation and has chased the game most of the time.

The Capitals hope to get a lead Sunday and then change the formula.

“Teams are going to take you apart if you’re passive and just try to protect the lead at all times,” Backstrom said. “That’s an area we talked about (that) we’ve got to be better at.”

Being up a couple goals, at any point, might be familiar to Washington, but it certainly is not for Pittsburgh.

The Penguins have not had a two-goal lead this season, and their extra practice time lately did not keep them from falling behind three times against the Islanders on Thursday. They needed a last-minute tying goal from Evgeni Malkin and a shootout winner from Crosby to break a two-game losing streak.

Pittsburgh has had to overcome at least one deficit in each of its six wins. Not ideal, but the comebacks might at least speak to team makeup.

“We have a really high-character group,” Penguins winger Bryan Rust said. “I think it just starts at the top with the leadership of (Crosby, Malkin and Kris Letang), and we just kind of try to follow their lead every time we get in a big hole.”