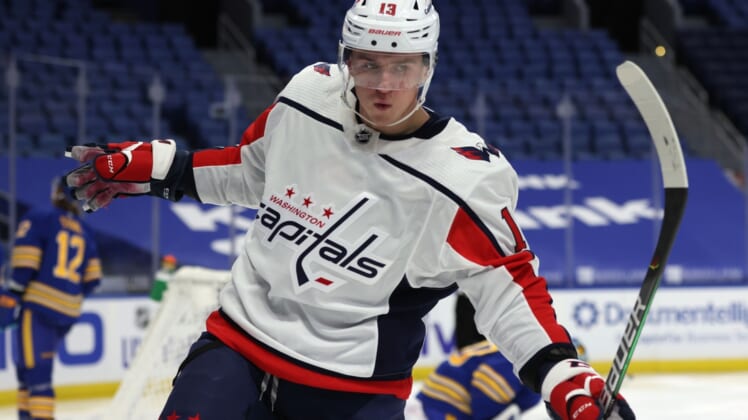 Almost everyone on the Washington Capitals’ roster has enjoyed early-season success against the Buffalo Sabres.

The Capitals look for a fourth win over the visiting Sabres in as many tries this season when they meet Sunday afternoon in Washington, D.C.

All three of Washington’s victories through five games have come against Buffalo, most recently on Friday when the short-handed Capitals prevailed 4-3 in a shootout.

Jakub Vrana recorded his third goal of the season against Buffalo and added an assist, while defenseman John Carlson scored the lone shootout goal for Washington, which owns a 12-8 scoring advantage in the season series.

Washington also came through without star captain Alex Ovechkin, No. 1 goaltender Ilya Samsonov, forward Evgeny Kuznetsov and defenseman Dmitry Orlov — all of whom will be out at least three more games because of NHL COVID-19 protocols. In addition, the Capitals lost points-leader Tom Wilson (three goals, three assists) to a lower-body injury in the third period that’s left him day-to-day.

“It is adversity,” Capitals coach Peter Laviolette said postgame. “Sometimes when you are faced with adversity, those are the sweetest wins. And those are where you have to overcome some obstacles.

“We certainly miss the guys that aren’t in there, but we (feel) good about the lineup.”

Rookie Vitek Vanecek has stopped 54 of the 58 shots he’s faced in winning both of his starts against Buffalo this month. It’s uncertain if he’ll be in goal Sunday, or whether veteran Craig Anderson will make his Washington debut after spending more than nine seasons with Ottawa.

Buffalo’s Linus Ullmark has a 2.44 goals-against average versus Washington in his two starts this season. He could be in net for a second straight game against the Capitals, or backup Jonas Johannsson might get his first start versus Washington in place of the injured Carter Hutton.

The Sabres have lost four of their first five games overall this season while dealing with an inconsistent offense that has scored three or more goals three times and one or none in the other two games.

“Losing is never acceptable,” veteran Eric Staal, who recorded his first goal as a Sabre on Friday, told NHL.com. “But, there’s also a process to how you win. We’re working at that. We all need to be a little bit better and push ourselves to get those wins and be overall better.

On Friday, Buffalo’s top line of Taylor Hall (six points), captain Jack Eichel (six points) and Sam Reinhart (three points) was held without a point. That’s one area where the Sabres obviously need to be better.

“We need (the) Eichel-Reinhart-Hall line to just get one or two and I’m confident they’re going to explode,” Sabres coach Ralph Krueger said. “They’re just so dangerous, so lethal.”

Buffalo also hopes to get a boost with the expected season debut of veteran forward Kyle Okposo, who has been dealing with a lower-body injury.