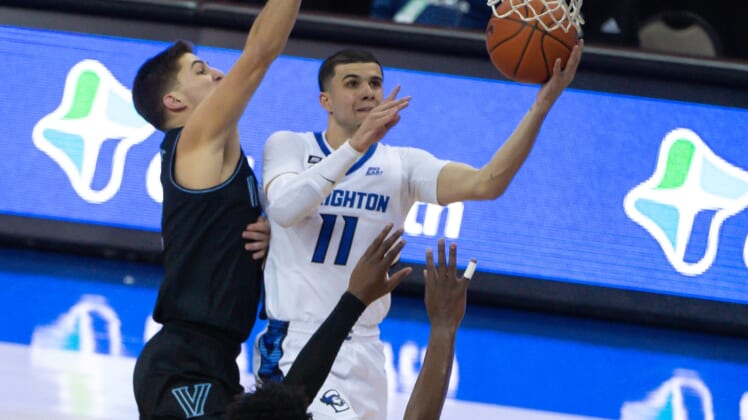 When guard Collin Gillespie crumpled to the court against Creighton on March 3, Villanova’s postseason aspirations appeared to dissipate.

The No. 5-seeded Wildcats defeated No. 12 Winthrop 73-63 in the first round of the NCAA Tournament’s South Region on Friday in Indianapolis. Villanova (17-6) will face No. 13 North Texas (18-9) in the second round Sunday at Bankers Life Fieldhouse.

After Gillespie went down with a torn MCL, Villanova lost 54-52 to Providence three days later and then was eliminated by Georgetown 72-71 in the quarterfinals of the Big East tournament.

But the Wildcats, who won national championships in 2016 and ’18, still advanced to the second round of the NCAA Tournament for the eighth straight season.

“We miss him,” Villanova coach Jay Wright said of Gillespie on a postgame interview on TNT. “He’s dying not being here.”

“It was a good team effort,” Wright said.

Robinson-Earl continues to develop into one of the top players in the country, and he showed a variety of skills in the win against Winthrop.

“I think we’ve been doing a great job,” Robinson-Earl said. “We had three days of practice after our Georgetown loss, and we had three really solid practices where we focused on the little things and getting back to the basics.”

Moore handled the ball a lot more without Gillespie and will continue to stay in that role.

“Justin is going to be a very integral part of our offense, our defense and our leadership,” Wright said.

North Texas was far from a lock to earn its fourth career berth in the NCAA Tournament.

Now, the Mean Green could reach the Sweet 16.

North Texas, which won four games in four days to capture the Conference USA tournament, continued its torrid play with a 78-69 overtime upset of No. 4 Purdue in the first round Friday.

After scoring the first 11 points of overtime, the Mean Green advanced to take on Villanova.

North Texas had never won an NCAA Tournament game before stunning the Boilermakers, thanks to 24 points and 11 rebounds from Javion Hamlet.

“I’ve been waiting for this opportunity my whole life, just to show the world who Javion Hamlet is,” he said.

Mardrez McBride and Thomas Bell added 16 points each for balanced North Texas, and James Reese had 13.

More impressive was the Mean Green’s suffocating defense, which limited Purdue to 36.2 percent shooting from the field.

Heading into the NCAA Tournament, defense was considered a priority.

“You never know what happens when you get out there and scrap,” North Texas coach Grant McCasland said.