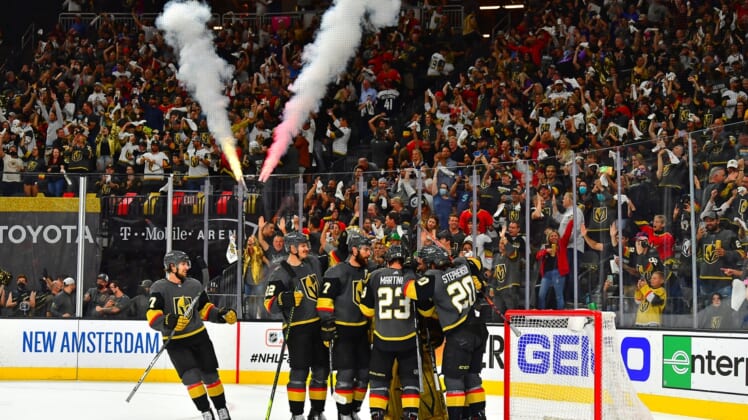 With a little over five minutes to go on Friday night, the Colorado Avalanche looked like they were on their way to a commanding 3-0 series lead against the Vegas Golden Knights and a share of the NHL record for consecutive victories to start the playoffs at seven.

But that all changed dramatically in the span of 45 seconds as Jonathan Marchessault banked in a rebound off the back of the leg of Avalanche goaltender Philipp Grubauer and Max Pacioretty followed it up with a redirect of a Nick Holden point shot to rally Vegas to a 3-2 victory.

Now the Golden Knights have a chance to even the series with a Game 4 victory on Sunday night in Las Vegas.

“Perseverance,” said Vegas coach Peter DeBoer of his team’s comeback victory. “We just stuck with it. We just kept our belief in our game which I think has been in a good place if you throw out Game 1.”

The Golden Knights, coming off a draining seven-game series with the Minnesota Wild that ended just two nights earlier, were blown off the ice 7-1 in Game 1 at Denver. They were then a hard-luck loser in Game 2, hitting the post five times in a 3-2 overtime loss despite outshooting the Avalanche 31-12 over the final two periods.

Mikko Rantanen scored the winner in Game 2 on a power play 2:07 into overtime and Grubauer put on a goaltending clinic with 39 saves. 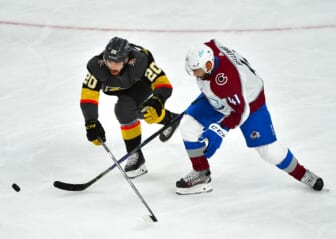 The Avalanche looked like they might escape Game 3 on Friday with another win despite being outshot 43-20 as Grubauer came up with 40 more saves before the Golden Knights rallied.

“The easy answer is this: for five straight periods now they’ve been far more competitive than we have,” Bednar said when asked what needs to change. “And to dissect the game any further than that is a waste of time. It’s a waste of time.

“I think we’re kidding ourselves if we think that that’s the competitiveness we need to be at, (against) the team that tied us for first in the league. We caught them on an off night in Game 1 and we gave them life in Game 2. We were able to come away with a win because of special teams and our goalie. And we’re going to need to compete way harder than that in order to beat them.”

When asked what adjustments his team must make heading into Game 4, Bednar again stressed it would be more a case of effort than strategy.

“It’s easy for a coach to just say, ‘Wow, you got outworked’ or for the players to say that this isn’t working or that isn’t working,” Bednar said. “But the video doesn’t lie. They were more competitive from start to finish and they won the hockey game. Now we have to come out and make that adjustment. That’s the adjustment.”

The Golden Knights, who get forward Ryan Reaves back from a two-game suspension, move on to Game 4 with plenty of confidence and a major chip on their collective shoulder.

“There wasn’t many people picking us at the start of the series, and the few that were on that raft I saw jumping with lifejackets after Game 2,” said DeBoer. “We know what people are saying out there and I think we’re using that as fuel and motivation.”