The Vegas Golden Knights, who were minutes away from falling three games down in their second-round series with the Colorado Avalanche, now have a chance to take control of the series Tuesday night.

Vegas had trailed 2-1 late in Game 3 on Friday night, but in a span of 45 seconds the Knights had grabbed a 3-2 lead and held on for the victory. They followed that with a dominant 5-1 win in Game 4, and they have all the momentum in this series heading into the pivotal Game 5 in Denver.

With the series at 2-2, a third consecutive victory would give the Knights a chance to close out the series at home on Thursday night, and they’re feeling confident heading to Denver, although the Avalanche have been much tougher playing at home.

“It feels good, but we still have a lot of work to do,” Vegas coach Peter DeBoer said. “It’s only two wins and we have too much respect for Colorado and their game and what they’re able to do. We know there’s still a lot of hill to climb, but really proud at how we’ve responded.” 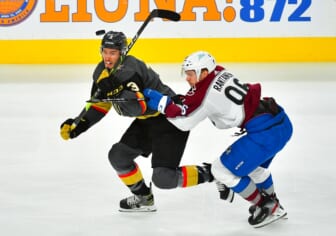 The Knights have controlled much of the last two games and have left the Avalanche searching for answers. Colorado coach Jared Bednar criticized his team after the Game 3 loss, and the Avalanche opened Game 4 with some fire. They took a 1-0 lead less than two minutes into the game, but once Vegas tied it the ice tilted in the Knights’ favor.

“We didn’t think we were going to come in here and take both games,” said forward Brandon Saad, whose goal 1:50 into Sunday night’s game was Colorado’s only score. “We didn’t play as good as we should’ve, but we’re going back to the building where we have success and we play well at.”

Ball Arena has been good to the Avalanche. They went 16-0-1 at home to end the regular season and have won their first four playoff games there, including a 3-2 overtime win in Game 2 against Vegas.

Colorado went an NHL-best 22-4-2 at home during the regular season, but two of those six losses came against Vegas. The Knights were the last team to win there, beating the Avalanche 3-2 in overtime on March 27.

One reason Vegas has grabbed momentum in the series is the defense has shut down Colorado’s top line. After the trio of Nathan MacKinnon, Mikko Rantanen and Gabriel Landeskog combined for five goals and three assists in Game 1 they have combined for two goals and two assists in the last three games. 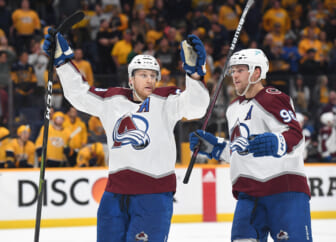 The line was shut out in Game 4, and if the Avalanche hope to advance they’ll need more from them — and other lines — Tuesday night.

“Keep in mind we’re playing a team that we tied with in points over 56 games and now we’re tied in the four-game series, and they’re going to make it hard on you,” Bednar said. “Right now they’re making it harder on us than we are on them.”