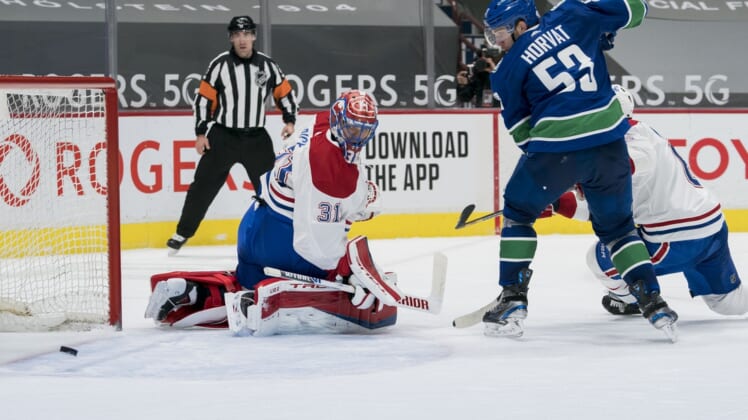 A three-game winning streak to begin the second half of their season has the Vancouver Canucks believing in themselves for the coming playoff push.

Another victory over the visiting Montreal Canadiens on Wednesday night would be an even bigger boon.

The Canucks are riding high after a couple of wins over the league-leading Toronto Maple Leafs and Monday’s comeback 2-1 shootout win over the Canadiens.

Vancouver’s most recent victory came thanks to Adam Gaudette’s game-tying goal in the final minute, Bo Horvat’s shootout winning tally and another scintillating performance from goaltender Thatcher Demko, who made 29 saves.

“It gives our group confidence,” Horvat said of his team’s first victory this season when surrendering the first goal. “We know we can do it and beat every team. It took us a little bit to figure that out and figure out to stick with the process and stick with our game. Obviously, we’d like to play with the lead instead of chasing, but to stick it out and do it again definitely shows the character.”

After a difficult February in which they won only twice in 13 games (2-9-2), the Canucks have won four of five outings.

“It was a big win,” coach Travis Green said. “That’s a good team over there and I liked how our team stuck with it. You’re always learning lessons along the way. In the past, when we got down we got away from our game, the type of game we need to play. The last few games we’ve stayed persistent and had purpose and believed in it the whole way.”

The Canadiens have a 2-1-3 record since Claude Julien was fired Feb. 24 and replaced by Dominique Ducharme.

“We’re getting better and better,” Ducharme said. “I don’t think we gave them much. I think we gave ourselves enough chances to score goals, but we’ve got to finish. Defensively without the puck, the way we’re coming back and applying pressure and forcing plays and creating turnovers, we’re doing a good job. So, a lot of good things.”

Helping Montreal’s cause is an improved goaltender Carey Price. The veteran netminder has surrendered one goal in each of his past three starts, stopping 82 of 85 shots.

“Just playing better,” Price said. “I’m not going to give you my technical secrets. The guys are playing solid hockey in front of me and letting me see the puck.”

Oddly enough, the Canadiens are really struggling in one area: extra time. Montreal is 0-7 in games decided in overtime (0-4) or a shootout (0-3). Montreal is 6-1-6 on the road this season, as it’s one loss in regulation away from home is the fewest in the NHL. Vancouver is 8-6-2 at home this season.

“We have a plan in place that we need to execute and try to tire them out. That’s when we need to strike,” forward Corey Perry said. “I don’t think we had too many chances to get to their net. It’s not something that you practice too often. I guess we can watch a little video or just discuss the options that we have because getting those points when we do go into overtime is huge.”