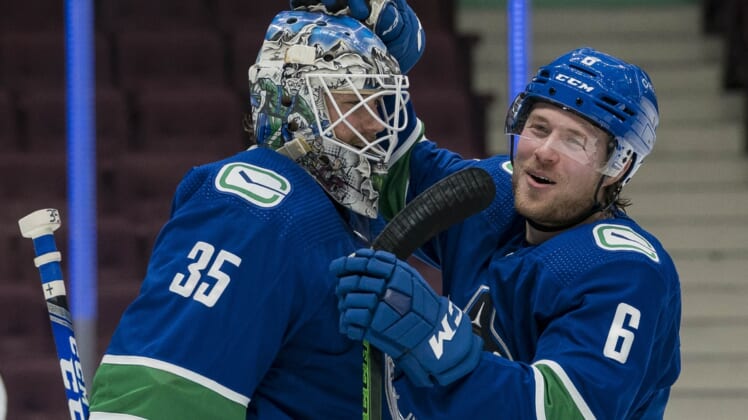 Playing some of their best hockey of the season, the Vancouver Canucks look to turn around a one-sided rivalry when they visit the Montreal Canadiens on Friday.

Less than three weeks ago, the Canucks’ season looked all but completely off the rails, as Vancouver dropped to 8-14-2 after a disastrous 2-9-2 record in February. In March, however, Vancouver has been one of the NHL’s best teams, posting a 7-2-0 record.

A victory Friday would bring the Canucks even with the Canadiens at 34 points for the fourth and final North Division playoff spot, although Montreal would still maintain the lead on a games-played tiebreaker.

Goalie Thatcher Demko has been the cornerstone of Vancouver’s big month. Demko is 7-1-0 with a 1.71 goals-against average and .951 save percentage over his last eight starts. The goaltender delivered again by making 30 of 32 saves in Wednesday’s 3-2 shootout victory over the Ottawa Senators.

“This is obviously a good stretch for not only for myself, but the team,” Demko said. “I knew that I had some good games in me, and I knew that obviously we didn’t have a great start to the year, so we had to start getting wins and getting them quick.”

Montreal was the last team to beat both Demko and the Canucks, as the Habs recorded a decisive 5-1 result in Vancouver on March 10.

The two clubs will play both Friday and Saturday in Montreal, wrapping up their nine-game season series. The Canadiens have dominated the action to date, posting a 5-0-2 record and outscoring the Canucks by a 34-19 margin.

Dating back to the 2015-16 season, the Habs are 13-0-3 in their last 16 games against Vancouver. The Canucks have gone more than 12 full seasons without a regulation victory in Montreal, as their last road win over the Canadiens came on Jan. 16, 2007.

Considering Montreal’s track record against Vancouver, these two games represent a good chance for the Canadiens to bank some points and regain some consistency. Friday’s game begins a six-game homestand for the Habs, following a 2-2-2 road trip.

“You get six out of 12 points — probably not what the ideal road trip is, (but) not a terrible road trip if you look at it as a whole,” Canadiens forward Brendan Gallagher said. “We’ve got to start finding ways to win these little mini-series. … At some point here, we need to string some wins together.”

Several Canadiens players have enjoyed a lot of statistical success against Vancouver this season, chief among them Tyler Toffoli. After collecting 10 points in 10 games as a member of the Canucks in 2019-20, Toffoli has 13 points (eight goals, five assists) in seven games against his former team this season.

Montreal is likely to split the back-to-back starts between Carey Price and backup goalie Jake Allen. Since Price has started six of the Habs’ last seven games, Allen could get the call Friday as he attempts to break a five-game (0-2-3) winless drought.

Demko will probably start again Friday since the Canucks are likely to keep riding his hot streak. Since Demko has started Vancouver’s last seven games and 10 of its last 11 games, however, backup Braden Holtby could be deployed Friday to give Demko some rest.