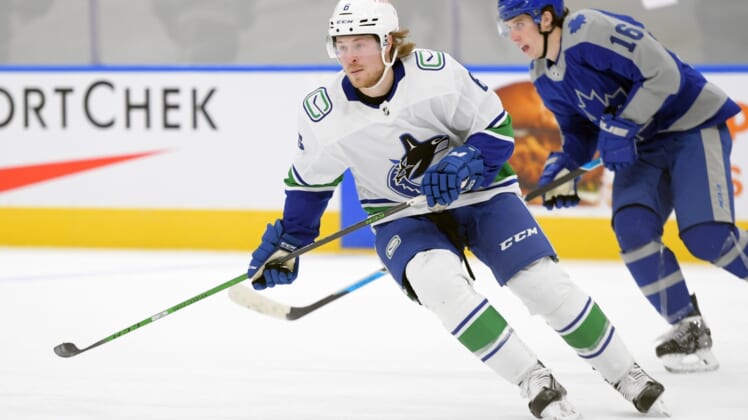 Amidst a roller-coaster season, the Vancouver Canucks look to stay on the upswing when they open a two-game home series against the Winnipeg Jets on Friday.

Vancouver is coming off a 5-1 road win over the Calgary Flames on Wednesday, its third straight strong performance during a 2-0-1 stretch. The Canucks sit two points behind the fourth-place Jets in the North Division, although Winnipeg has four games at hand on Vancouver.

The Canucks haven’t enjoyed much consistency this season. A 1-5-0 stretch was followed by four consecutive victories, and Vancouver then lost six games in a row before its current three-game points run.

Forward Bo Horvat is hopeful that Wednesday’s win over the Flames is another sign that the Canucks are getting on track.

“We just want to keep building off of it,” Horvat said. “We don’t want to make our highs too high and our lows too low. … It definitely gives our group confidence, but we have to do that every single night. We’re still got a lot of hockey left. We’ve got a lot of work to do, a lot of catching up to do.”

Brock Boeser recorded a goal and two assists for his third three-point game of the season. Boeser has 21 points (12 goals, nine assists) in 20 games.

Braden Holtby stopped 35 of 36 Calgary shots, ending a slump that saw the goalie post an 0-3-0 record and .844 save percentage in his previous three outings. Since Thatcher Demko has also been struggling, the Canucks could opt to play the hot hand and start Holtby again on Friday.

After surrendering 60 goals over their first 15 games, the Canucks have conceded only 12 goals over their last five games. A big part of that improvement has stemmed from both killing penalties and taking fewer penalties in general — Vancouver is 13-for-14 on the penalty kill over those five games.

Penalties were a big part of the Jets’ 3-2 loss to the Edmonton Oilers on Wednesday. The two teams combined for 32 penalty minutes and 11 power plays, leaving the Jets unable to gather much momentum after allowing two goals within the first five minutes.

Despite the “choppy” flow of play and the “two pretty big gaffes” early on, Winnipeg head coach Paul Maurice felt the game could have gone either way.

“You walk off the bench in a bad mood every time you lose a game, but it wasn’t a missed opportunity. We played hard, they played hard,” Maurice said.

Mark Scheifele has 12 points (five goals, seven assists) over the course of an eight-game points streak.

Connor Hellebuyck saved 27 of 30 shots against the Oilers. Hellebuyck has started 13 of Winnipeg’s 16 games this season and will likely make his seventh straight start on Friday, unless Maurice wants to give backup Laurent Brossoit his first action since Feb. 2.

Pierre-Luc Dubois and Nate Thompson (lower-body injuries) are questionable for Friday. Both players on the Jets’ injured reserve but have been participating in practice.