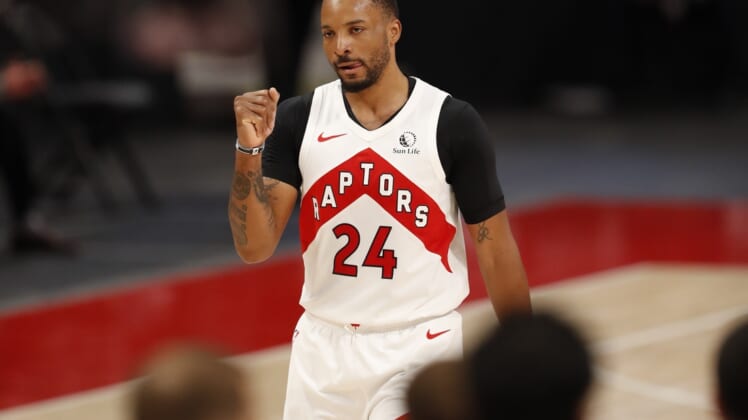 The Utah Jazz look like a much more vulnerable team than before the NBA All-Star break as they continue a five-game road swing with a Friday game against the Toronto Raptors in Tampa.

When Utah lost 131-122 to the host Washington Wizards on Thursday night, it marked the third time in five games that the Jazz surrendered 131 points. They lost all three games.

The Jazz allowed Washington to shoot 54.7 percent from the field, and the Wizards scored at least 31 points in all four quarters. Washington stars Bradley Beal and Russell Westbrook combined for 78 points.

“We’re not going to get anywhere if we just try to outscore people,” Utah guard Donovan Mitchell said.

Jazz coach Quin Snyder added, “Starting out the game, we were too casual getting back on a couple possessions, we got beat middle, we didn’t shift in from the weak side or we didn’t get back and hit somebody and get them off the glass, so it was a collection of things. Just the urgency that we have on defense needs to improve.”

The Jazz, however, were out of sync on offense for most of the game with point guard Mike Conley out of the lineup for a rest. Utah trailed by as many as 24 points before Mitchell scored 20 points in the third quarter to get Utah back in the game.

Conley is expected to return to action on Friday. The Jazz also hope they can return to getting off to better starts and playing with more urgency on both ends of the court. The first step is to improve defensive communication. The next step is to reduce turnovers and lackadaisical offensive possessions.

“We have to be more precise,” Snyder said. “It has to be more important to take care of the ball.”

After a 22-2 run, the Jazz have just three wins in their past eight games.

Toronto enters the Friday contest as a team also searching to regain some momentum now that key players have returned to the lineup. The Raptors are still winless in March, having dropped all six of their games.

Defeats to Detroit bookended that stretch. Toronto came close to ending the skid before falling to the Pistons a second time on Wednesday, 116-112.

Toronto’s Norman Powell, who finished with a career-high 43 points, made it a one-possession game by sinking a 3-pointer with 32.2 seconds left. However, Detroit’s Jerami Grant answered with a step-back jumper in the final seconds to secure the win.

“It is frustrating because we had a chance to win this game, but we couldn’t make shots,” Raptors coach Nick Nurse said.

The loss spoiled the returns of Fred VanVleet and Pascal Siakam to the court. VanVleet (13 points) missed five games and Siakam (12 points) sat out six, both sidelined because of COVID-19 health and safety protocols.

“Obviously, I haven’t been able to do much for the last couple weeks, but it was great being back out there,” said Siakam, who shot 3 of 11 from the floor on Wednesday. “I’m tired, though, and I think I’ve lost some weight. Maybe it will make me faster.”

Powell carried the offense on his shoulders in the absence of Siakam and VanVleet. He is averaging 30.3 points on 56.8 percent shooting in March. Powell also has connected on 29 of 59 3-point attempts this month (49.2 percent).