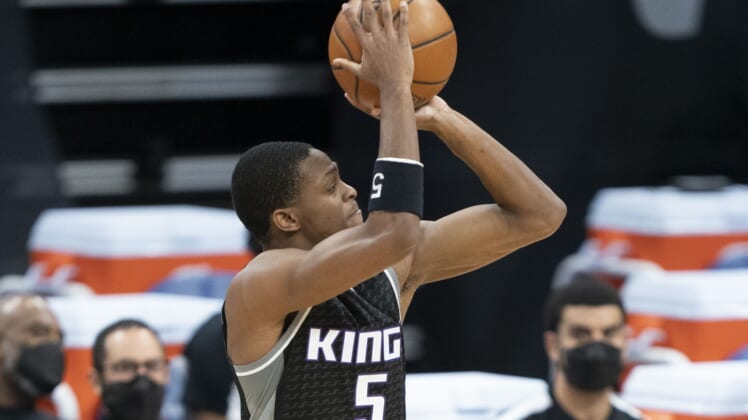 The Portland Trail Blazers will aim to defeat Sacramento for the third straight time this season when they host the Kings on Thursday night.

The contest is the final one before the All-Star break for both teams.

Sacramento also enters on a high note after downing the visiting Los Angeles Lakers 123-120 on Wednesday. It was just the second win in the past 12 games for the Kings.

As for the Trail Blazers, All-Star guard Damian Lillard once again played the role of hero despite just 6-of-17 shooting while scoring 22 points.

Lillard knocked down the game-winning 3-pointer with 13.7 seconds left to give the Trail Blazers the lead and then drew a charge on Draymond Green with under four seconds remaining to preserve it.

“I think tonight was one of those situations where I hadn’t been shooting the ball well but our team was continuing to fight and we were still in the game,” Lillard told ESPN afterward. “I kept telling myself when it’s time to make winning plays I’ve got to still be present and I had the presence of mind and that same confidence and energy when the game was on the line. I just came up big again tonight.”

Lillard, who is having an MVP-caliber season, has scored 20 or more points in 23 of the past 24 games.

“Dame is undeterred,” Portland coach Terry Stotts said afterward. “Obviously he didn’t shoot the ball well tonight, but he made the two plays of the game. He makes the big three and takes the charge. He’s a super competitor, and never thinks he’s out of the game, and always is willing to put himself on the line to make the play at either end.”

Carmelo Anthony also has been hot of late and tallied 22 points against Golden State.

Anthony established season bests of 29 points and six 3-pointers in Monday’s 123-111 home win over the Charlotte Hornets and has topped 20 in three of the past four games.

Sacramento guard Buddy Hield is also in a strong groove after averaging 29.5 points over the past two games.

Hield scored a season-best 30 points in Sunday’s 127-126 loss to the Hornets and followed up with 29 in the triumph over the Lakers.

Hield has made 21 of 32 shots during the span, including 15 of 26 from 3-point range. He was 7 of 11 from behind the arc against Los Angeles while playing on a tender ankle.

Harrison Barnes converted the go-ahead layup with 30.1 seconds left as the Kings notched a much-needed victory.

“Our backs are against the wall, man,” Hield said afterward. “At some point, you have to take this thing seriously. You know that people’s jobs are on the line. Everybody’s fighting for something.”

Sacramento’s building efforts with Hield, standout point guard De’Aaron Fox and forward Marvin Bagley III have yet to develop a playoff-caliber team. The Kings are just 14-21 and look destined to miss the playoffs for the 15th straight season.

Bagley, who was selected second overall in the 2018 draft ahead of Dallas Mavericks superstar Luka Doncic, said he can’t allow himself to look ahead.

“I’m taking it one day at a time,” Bagley said after scoring 14 points against the Lakers. “It’s kind of hard to look at the future. You don’t know what can happen in the future.”

One of those future pegs, rookie guard Tyrese Haliburton, is expected to miss his fourth straight game with a calf injury. Big man Hassan Whiteside (health and safety protocols) is slated to sit out his sixth consecutive contest.