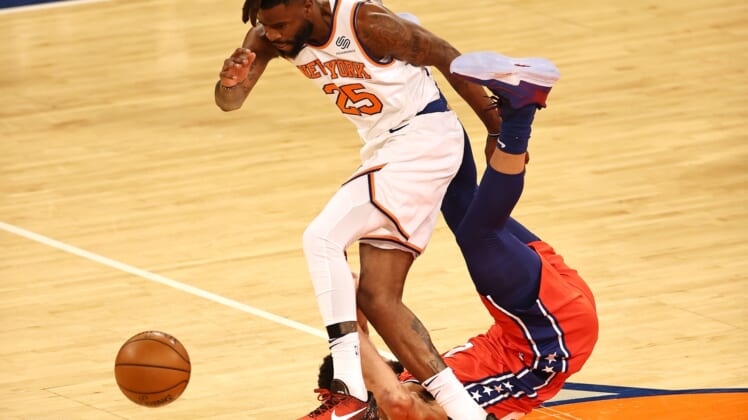 Three times in the past week, the Knicks have lost to an upper-echelon Eastern Conference team.

The most recent defeat left the Knicks making frustrated comments about the officiating.

New York, however, hopes it won’t feel any frustration when it hosts the Washington Wizards on Tuesday night.

The Knicks are coming off four straight games decided by five points or fewer, and their only win was 94-93 Thursday over the Orlando Magic in a game decided by Reggie Bullock’s steal against Evan Fournier on Orlando’s last possession.

On Sunday, the Knicks hung with the Philadelphia 76ers for nearly three hours before falling 101-100 in overtime.

“Everyone wants to win,” New York’s RJ Barrett said. “When we lose, especially a game like this, a game we should’ve won, it’s a tough way to lose.”

Barrett’s comments were made after Julius Randle made incensed postgame remarks about being called for a loose-ball foul with 5.3 seconds left, allowing Tobias Harris to sink the game-winning free throws.

“After all the fouling and everything that was going on, for them to call that and decide the game is (expletive) ridiculous,” Randle said. “They have to do a better job.”

The Knicks enter a two-game series against the Wizards with four losses in their past six games after going 8-3 in their previous 11.

Randle scored 24 points Sunday, hit the game-tying 3-pointer in regulation but missed a potential game-winning shot with one second left in overtime. He connected on 7-of-23 from the field in 46 minutes and is shooting 40 percent (46 of 115) in his past six games.

The Wizards can relate to some of New York’s frustration from Sunday as they enter with six losses in their past seven games since a two-point win over the Los Angeles Clippers on March 4.

The latest defeat was 113-106 Sunday in Brooklyn, when the Wizards nearly erased a 14-point deficit with a late comeback.

The Wizards shot 53.2 percent from the field but committed 19 turnovers and were 7-of-21 from 3-point range.

“You can still win the game,” Washington coach Scott Brooks said. “We were right there with only seven makes. You’ve got to be able to generate points in the paint and generate points at the free-throw line.”

Russell Westbrook and Bradley Beal combined for 14 turnovers on a night in which four Washington starters scored at least 17 points.

Westbrook posted a triple-double with 29 points, 13 assists and 13 rebounds, and Beal was held to 17 points, his second-lowest figure of the season.

The Knicks took the first meeting of the season 109-91 in Washington on Feb. 12.