PREVIEW: Toronto Raptors out to avenge loss to Minnesota Timberwolves 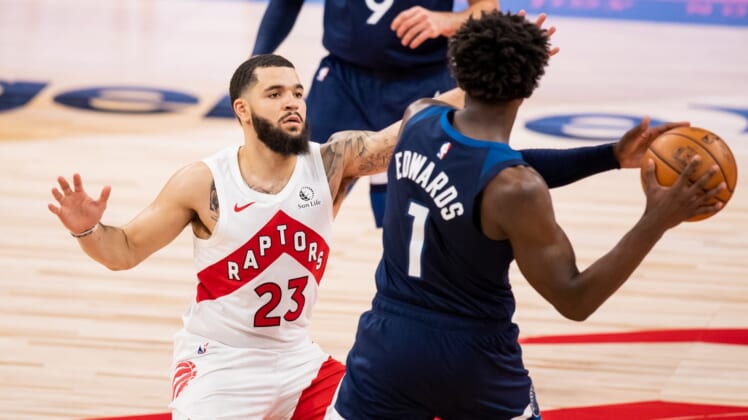 The Toronto Raptors will be out to avenge their surprising Sunday loss to the Minnesota Timberwolves when the teams meet again Friday night in Minneapolis.

The Timberwolves ended a four-game losing streak with a 116-112 win at the Raptors’ temporary home in Tampa. The result ended a streak of 16 consecutive losses for Minnesota as the road team against the Raptors.

The teams have gone in different directions since their Sunday matchup.

The Raptors won two in a row on the road against the Milwaukee Bucks, including a 110-96 victory Thursday night despite the absence of Kyle Lowry.

They would improve their record to .500 if they beat the Timberwolves on Friday for their 15th win of the season.

The Timberwolves have dropped two in a row at home since beating the Raptors, including a 134-128 overtime defeat to the Indiana Pacers on Wednesday.

Lowry, who has a sprained thumb, will sit out again Friday.

“It’s not good, obviously, because he’s not playing,” Raptors coach Nick Nurse said before the game Thursday. “I think it probably will keep him out (for) these two for sure, then probably we’ll have a little better idea.”

Lowry injured the thumb against the Bucks in the first quarter on Tuesday, but left the game in the third quarter because of an injured left ankle.

The Raptors do have OG Anunoby back. The defensive stalwart missed his 10th straight game Sunday with a strained calf. He returned for the two games in Milwaukee and averaged 11.5 points and seven rebounds in those contests.

He helped the Raptors hold Giannis Antetokounmpo to 23 points on Thursday after the two-time NBA Most Valuable Player scored 34 against the Raptors on Tuesday.

“He played good and I think he worked all night on Giannis, which you’ve got to do,” Nurse said.

Norman Powell led Toronto on Thursday with 29 points. Pascal Siakam added 27 points for the Raptors, who led by as many as 23 points while handing the Bucks a fifth consecutive defeat.

After the loss to Indiana, Timberwolves forward Karl-Anthony Towns said that his team needs to improve its defense.

If the Timberwolves can become strong defensively, Towns feels the team “can be special.”

“And it takes every single person in our locker room to choose to be special, and these guys want to do it,” he said.

Towns had 20 points, 11 rebounds and three blocked shots when the Timberwolves upset Toronto.

The Timberwolves are without D’Angelo Russell, who is expected to miss four to six weeks following arthroscopic surgery to remove a loose body in his left knee.

Towns and Russell have played only four games together this season.