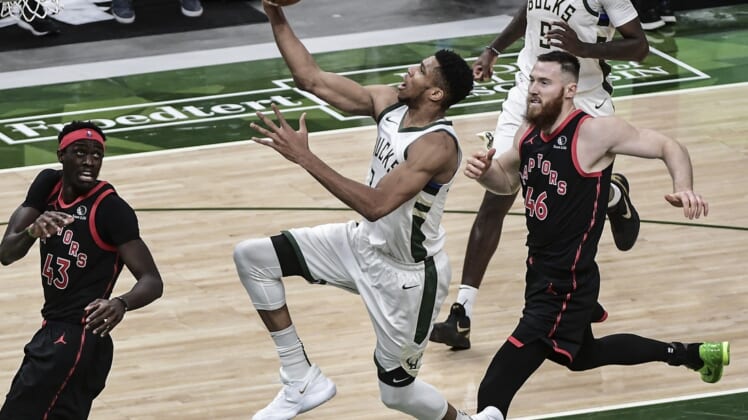 The Toronto Raptors will go for a two-game sweep, this time possibly without Kyle Lowry, when the NBA schedule gives the host Milwaukee Bucks a rematch in a nationally televised game Thursday night.

The Raptors went small and came up big in a 124-113 win at Milwaukee on Tuesday that featured 33 points from Fred VanVleet and 23 from Pascal Siakam.

Lowry chipped in with 18 in just 22 minutes before calling it a night early in the third quarter because of pain in his left ankle. He is listed as questionable for the rematch.

The veteran sprained the ankle in the first half, went to the locker room, then was able to return to start the third quarter.

But less than four minutes later, it was clear he was in no shape to finish the game.

Lowry left with the scored tied at 74, after which the Raptors were nonetheless able to get the better of the Bucks, who lost a season-worst fourth straight.

VanVleet was not surprised to see how his team responded to adversity.

“Any time a guy goes down, it’s that next-man-up mentality that we’ve always had here,” he noted. “Something I’ve tried to continue to do is increase my level of play when he’s out. I thought the entire team just picked it up a notch when he went down. That’s what you like to see.”

Chris Boucher chipped in with 14 points, OG Anunoby had 13 and Norman Powell 11 as the Raptors avenged a 115-108 home loss to the Bucks three weeks earlier.

Aron Baynes had started at center in the first meeting, scoring 11 points but recording a minus-12 plus/minus in 23 minutes. He was replaced by the smaller Anunoby in the rematch and played just 18 minutes off the bench, recording four points and a minus-3 plus/minus.

Boucher, who was called upon for 30 minutes off the bench Tuesday, is a candidate to start in the rematch should Lowry not be able to go.

Despite playing a smaller lineup, the Raptors were able to reverse a 59-46 rebounding deficit from the first meeting. Siakam grabbed 13 rebounds as Toronto won the battle of the boards 44-41 the second time around.

The Raptors also used their increased quickness to get to the free throw line 21 times on Tuesday, nine more than in the earlier loss.

Giannis Antetokounmpo had 34 points as part of a double-double in the loss, scoring 10 more points than he’d had in the win. But Khris Middleton was limited to 11 points and Brook Lopez nine in the rematch after they’d combined for 44 points the first time around.

The Bucks played without Jrue Holiday, who missed his fifth straight game in COVID-19 protocol. He is eligible to play on Thursday.

With or without Holiday, Bucks coach Mike Budenholzer assured after Tuesday’s loss that the approach to the rematch would be the same as any other game.