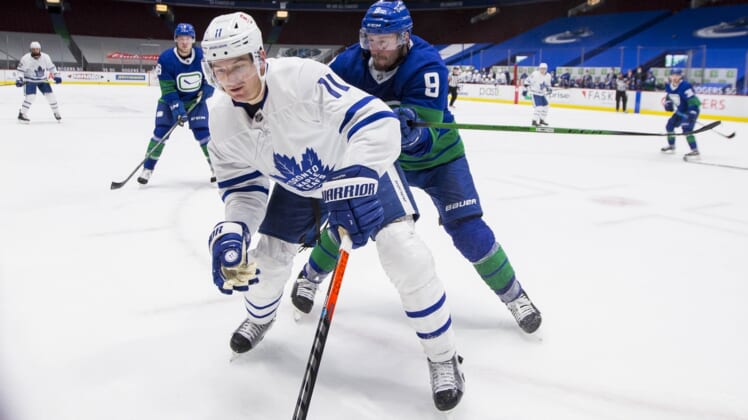 They are two of the top teams in the North Division, but both the Toronto Maple Leafs and Winnipeg Jets are looking to make amends for disappointing defeats when they start a three-game set Tuesday night in Toronto.

The Maple Leafs still own the best record in the league after ending a road swing by losing two straight games to the Vancouver Canucks, including a blown third-period lead en route to Saturday’s 4-2 defeat.

Meanwhile, the Jets are coming off a 7-1 shellacking at the hands of the Montreal Canadiens Saturday night.

“We have to take responsibility for what happened in terms of two losses,” said Toronto defenseman Morgan Rielly, whose team lost consecutive games in regulation for the first time this season. “We have to look in the mirror.

“It’s not pointing the finger at the other team, saying, ‘Wow, what a great job.’ It’s up to us to be in control of the game, how we play, how we compete.”

Before arriving in Vancouver, the Maple Leafs torched Edmonton in a trio of games, outscoring them 13-1, while keeping Oilers star Connor McDavid off the scoresheet in all three.

“There’s still a lot of good things in our game, but we had an opportunity to make it a real great road trip, and it ended up only being a good one,” Toronto captain John Tavares said.

Certainly, a pair of defeats isn’t the end of the world for a Toronto team that has 38 points in 26 games. However, there are a few concerns, among them that forward Auston Matthews — who leads the league with 18 goals — has gone five straight games without lighting the lamp, while he and linemate Mitch Marner have looked off-kilter.

“Maybe we’re forcing it a little too much,” said Marner, who is fourth in the league with 24 assists despite having only three in the past seven games. “It’s time to refresh to get talking of trying to find that part of our chemistry (again).”

The Jets had won six of seven games prior to their beatdown in Montreal, so one key will be to keep it in perspective. Sure, it was a bad performance, but the message from leadership is to move along.

“It was just one of those nights that the puck was bouncing all over us,” said goaltender Connor Hellebuyck. “It wasn’t settling for us, it was settling for them. It wasn’t a lack of effort. I think there is a lot of heart in that room. We might just have to toss this one in the trash.”

It’s worth noting, the Jets beat Montreal in their first three meetings this season.

“It’s one game. Throughout a season there’s going to be nights like that,” captain Blake Wheeler said. “We’ll take the bulk of the work over one outlier.

“I think the greatest thing about our team this year is the maturity level we’ve had since Day 1 of training camp,” he added. “We’re going to use that again, build each other back up these next few days before we play a really good Toronto team.”

“It’s not simple, and it shouldn’t be misconstrued as casual. Because the important part of that game is the next one. We had a tough night,” Maurice said. “We have an entire hockey team that’s got a minus on them. Both goalies played. It was, at the very least, well spread out.

“We’ve been a good hockey team through the first 24, we had a very difficult night … (but) that’s certainly not the definition of our team, so we’ll move on and get ready for the next one.”