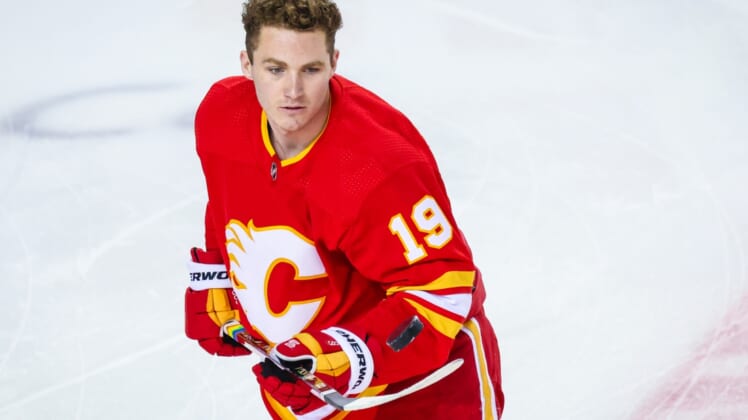 The host Toronto Maple Leafs will face a different Calgary Flames team Friday night when they meet in the opener of a two-game set.

The Maple Leafs are 3-1-0 this season against the Flames, but those games were played before Darryl Sutter took over as coach in Calgary on March 4.

The Flames are playing a faster-paced style since Sutter replaced Geoff Ward and are 3-2-1 since the change despite a 7-3 loss to the Edmonton Oilers on Wednesday night that ended a three-game winning streak.

“It’s six guys, counting your goalie, in terms of handling the puck, moving the puck and making good decisions and execution,” Sutter said before Wednesday’s loss. “And then even though you’re playing faster, you’re still in the mindset of, ‘Okay, I can execute. I can play fast, but I can make the play, too.'”

The Flames gave the Maple Leafs all they could handle in their previous two-game visit to Toronto, winning 3-0 on Feb. 22 and losing 2-1 in overtime on Feb. 24. The Maple Leafs swept two games in Calgary Jan. 24 and 26.

The Maple Leafs are in a 1-5-0 funk after losing 4-3 against the host Ottawa Senators on Sunday.

Toronto has had four days off to regroup.

Maple Leafs coach Sheldon Keefe said: “Whatever it might have been that has caused us to dip a little bit, whether it’s fatigue, execution, habits or mental mistakes … between the practice time and the rest, our perspective is those things should be fixed and we should be back to playing our best. That’s what our expectation is.”

In losing to the Oilers on Wednesday, the Flames strayed from the tight-checking style Sutter employs and allowed four straight goals in the first 8:38 of the third period to fall behind 7-1.

“I just think we have to play harder,” said Matthew Tkachuk, who had two assists for the Flames on Wednesday. “We’ve got to try to get the lead. Not every night you’re going to get the lead, but when that happens, you just have to keep at it, grind it out and just play the way that we know is going to make our team, in particular, successful. …

“I guarantee Toronto is watching us tonight and probably licking their chops at the way we played. Those skill guys over there, they’re wanting a game like that on Friday and Saturday, I can guarantee that.”

Said Sutter: “It doesn’t matter who we’re playing next. This team, this group of players, it has to learn that they don’t have the firepower to not put themselves in a position to be good defenders or to check or play well in their zone; that’s not going to happen. Look at the shots, it ends up what … 33-30? I don’t think we’re going to score eight goals and win 8-7.”

The Maple Leafs recalled Alex Galchenyuk, Alexander Barabanov and Timothy Liljegren to the taxi squad and sent Calle Rosen and Kenny Agostino back to the Toronto Marlies of the American Hockey League. Nic Petan was re-assigned to the taxi squad.

The Maple Leafs lost winger Jimmy Vesey on waivers to the Vancouver Canucks.