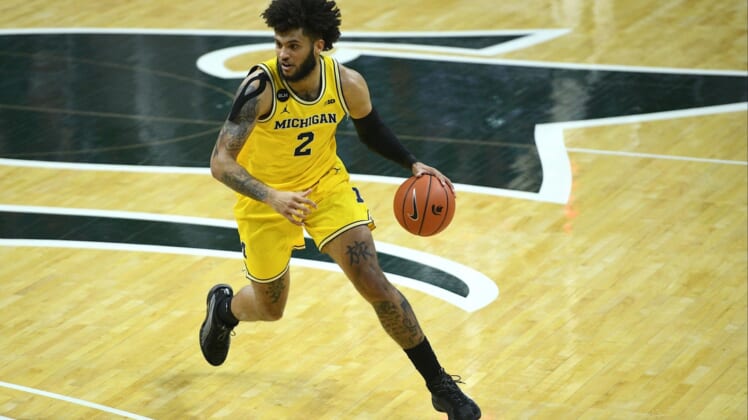 Michigan feels a little slighted, even though it enters the NCAA Tournament as the No. 1 seed in the East Region.

The Wolverines lost three of their past five games and might not have starting forward Isaiah Livers as they seek their first national championship since 1989. Livers, who averages 13.1 points and six rebounds a game, has a stress fracture in his right foot.

The Wolverines, who will play Texas Southern in their first-round game Saturday afternoon at Mackey Arena in West Lafayette, Ind., don’t feel they need a miracle to live up to their seeding and reach the Final Four. While many pundits feel Michigan is the most vulnerable among the No. 1 seeds, the players feel they could compensate for Livers’ loss and make a deep run.

“We’re the popular choice in this room and, in my opinion, that’s all that matters,” center Hunter Dickinson said. “I don’t really care if the public thinks we’re going to win.”

The Wolverines have two experienced reserves — Brandon Johns Jr. and Chaundee Brown — ready to absorb Livers’ minutes. They also possess a well-balanced attack with Dickinson in the middle, potential NBA lottery pick Franz Wagner on the wing and Mike Smith running the point.

The Wolverines (20-4) won the regular-season championship in the Big Ten, widely considered the strongest league in the nation this season. They lost in the semifinals of the conference tournament to archrival Ohio State, 68-67.

Howard was a prominent member of Michigan’s Fab Five teams, which reached the title game in 1992 and 1993. Back then, he never anticipated coaching his alma mater in the NCAA Tournament after his playing days ended.

“I haven’t talked about my experience playing in the tournament at all; we haven’t discussed that,” he said. “We’re more locked in about who’s our next opponent.”

Texas Southern (17-8) advanced in the First Four on Thursday by defeating Mount St. Mary’s 60-52 in a matchup of No. 16 seeds. The Tigers are 2-8 all-time in the tournament. They also won a First Four game in 2018 before getting eliminated by Xavier, the top seed in their region.

Texas Southern, which has won 10 straight games and 15 of its past 16, reached the NCAA Tournament by winning the Southwestern Athletic Conference tournament.

The Tigers rallied from a 30-20 halftime deficit in the First Four as forward John Walker finished with team highs of 19 points and nine rebounds. The team now gets a chance to play the role of giant-killer.

“Everybody looks forward to a Cinderella story,” coach Johnny Jones said in a postgame interview. “Our guys come to our school to play against the best competition in the country year in and year out. This is another opportunity. It wasn’t on our schedule, a team that’s been in the top two or three (a majority of the season).”