PREVIEW: Top-seeded Michigan draws No. 8 LSU in second round 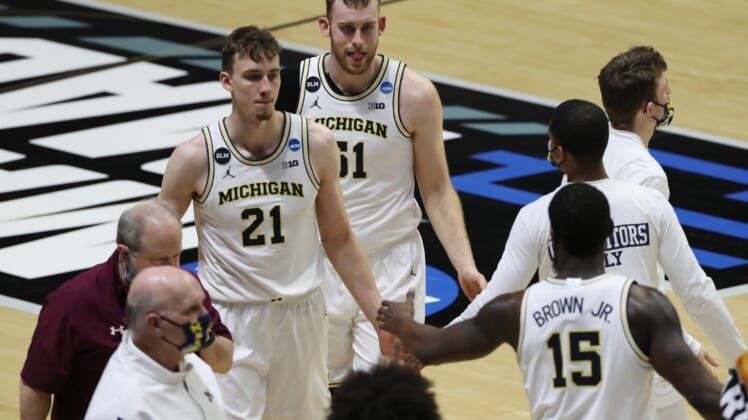 Juwan Howard generally liked what he saw from his team in its first NCAA Tournament game on Saturday. The competition will get stiffer on Monday.

Michigan’s second-year coach watched his team lead by double digits most of the way while eliminating No. 16 seed Texas Southern, 82-66.

The Wolverines lost three of their last five games heading into the tournament, including a one-point decision to Ohio State in the Big Ten tournament semifinals.

They had no trouble disposing of Texas Southern, limiting the underdog to 35.9 percent shooting and one 3-point make.

“Our practices were really good preparing for this moment right here,” Howard said. “Offensively, we did a really good job of sharing the basketball. If you look at the numbers, each and every guy got an opportunity to shoot a shot when the shot is open and make the play for others.”

Point guard Mike Smith led the way with 18 points and five assists, but he had plenty of help.

“Really enjoyed the effort that our guys brought and the mindset that they had coming into this game,” Howard said.

Johns started in place of Isaiah Livers, who’s dealing with a stress fracture in his foot. Livers is unlikely to play in the tournament.

“Last season, Isaiah was out with an injury and Brandon was inserted into the starting lineup,” Howard said. “Brandon understands by being ready, each and every time, you never know when your name is going to be called on. He pretty much expected that he would possibly be the guy who would have to fill in for the starting role.”

LSU, which lost in the SEC tournament final to Alabama by one point, manhandled St. Bonaventure with big performances from four players. Guard Cameron Thomas led the offense with 27 points, including 11-for-13 shooting from the free throw line.

“Cam Thomas, just clear out and give him a lane and let him go,” coach Will Wade said in a postgame TV interview. “Those finishes he had down there were tough, and he got back to drawing fouls. Drew a ton of fouls and had a ton of free throws — basically count those when he gets there.”

“Bonaventure was 13-0 when they out-rebounded their opponents and 3-4 when they didn’t, so we knew coming into the game that was a huge stat,” Wade said. “For us to blast them by (19) on the glass was tremendous.”