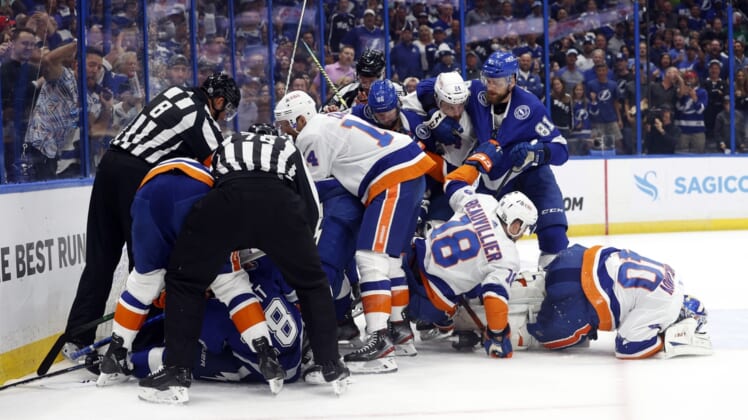 The Tampa Bay Lightning have become accustomed to playing on the road during a historic 10-month run through two Stanley Cup playoffs, yet Thursday’s game promises to be a unique situation.

Lightning head coach Jon Cooper figures to tap into some local knowledge since he is aware firsthand of the hostile environment that awaits the Lightning when they hit the road again in Game 3 of an NHL semifinal series at Uniondale, N.Y.

The Lightning evened the series at a game apiece Tuesday night, when Tampa Bay scored three unanswered goals in a span of just over 16 minutes of game time bridging the second and third periods in a 4-2 victory.

Success on the road during the playoffs has become routine for the Lightning, who went 16-6 in the fan-less Canadian bubbles on their way to winning the Stanley Cup last summer. They are 5-1 away from home this spring.

“In a weird way, playing last year in the playoffs the whole time on the road — even though there weren’t fans there — it probably helped us in a way,” Cooper said. “Whether you’re at home or on the road, you have to take the crowd out of it and concentrate on your game. And these last two playoff runs, we’ve done a really good job of that.”

There will be no shortage of noise Thursday night, when a crowd of at least 12,000 at the cozy Nassau Coliseum is expected to be revved up following a fracas-filled Game 2 in which 20 penalties and 54 penalty minutes were issued.

As the third period horn sounded in Game 2, a fight broke out involving everyone on the ice except Lightning goalie Andrei Vasilevskiy. 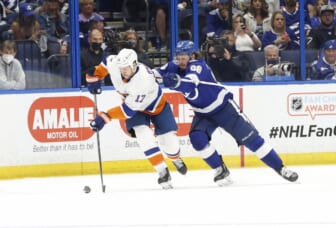 “I think as playoff series go on and you keep seeing the same faces over and over again, things get a little more chippy every night,” said Islanders left winger Matt Martin, who drew two penalties and was challenging Blake Coleman to continue fighting as the teams skated off the ice.

Added Martin: “We got the first game (in Tampa), we knew they were going to come out a little bit more desperate and bring their best game and we were prepared for that.”

Cooper, who played lacrosse at Hofstra University across the street from Nassau Coliseum, attended countless Islanders games during his undergrad days in the late 1980s. He spoke fondly of the Coliseum, which the Islanders are finally vacating for good in the fall in favor of UBS Arena.

“I know how it is because I was there first-hand and I saw how they were,” Cooper said. “It’s a cool environment to be in. Looking forward to it.”

The Islanders are 4-2 during the playoffs at the Coliseum, where they earned series-clinching wins over the Pittsburgh Penguins and Boston Bruins, but fell to both teams in Game 3s on home ice.

To win a Game 3 at home will require the Islanders to rediscover the form they displayed prior to Tuesday, when Brayden Point scored a first-period goal that snapped a stretch of 170 minutes and nine seconds in which New York didn’t trail.

In addition, the multi-goal deficit in the third period was the Islanders’ first since Game 1 against the Bruins.