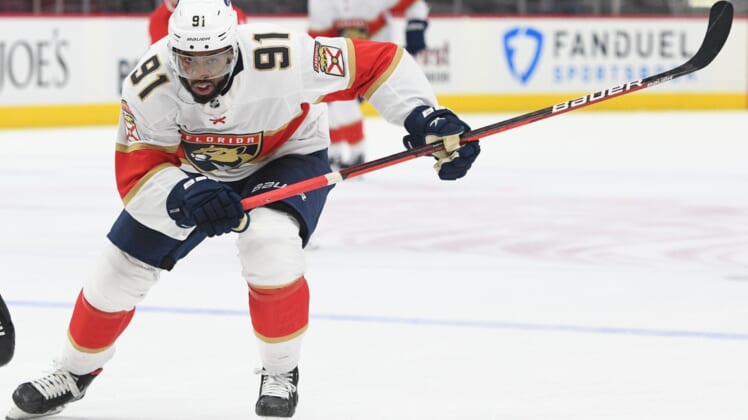 The Florida Panthers have electrifying forward Anthony Duclair back in the lineup, and the results paid off immediately on Saturday afternoon.

He will try to bring the same energy into a Sunday matchup with the host Tampa Bay Lightning.

Placed back on the top line with center Aleksander Barkov and left winger Carter Verhaeghe, Duclair brought his speed game Saturday and generated a goal and an assist as the Panthers notched a 2-0 home win over the Nashville Predators.

On Barkov’s second period goal, Duclair raced in and fired a backhanded pass that bounced off the captain. Barkov still was able to collect it and roofed a slick backhander over Nashville’s Juuse Saros to finally put the home side on the board.

A two-time 20-goal scorer who is playing in his first season with Florida, Duclair found himself on the fourth line after his return from a lower-body injury, but he was quickly back on the first line.

“I think any time you’re reunited with those two guys, you get a little extra step,” said Duclair, who has three goals and 11 assists in 23 games. “You put it in an area for Barkov and he’ll figure out the rest. That was a great skill play by him to put it in.”

Duclair and his teammates immediately turned around and headed up Florida’s west coast to Tampa for a key matchup with the Lightning at the top of the Central Division.

While Florida improved to 9-0-1 after a loss and has not lost consecutive regular-season games so far this season, the matinee against the Predators was a struggle throughout, mainly due to the incredible play in goal by Saros.

In a first period filled with six minutes of power-play time, the Panthers put up a 22-7 shot advantage. They attempted 76 total shots and finished with a robust 49 on goal in the win, which wasn’t secured until Duclair outraced the defense for an empty-net tally with 15 seconds remaining.

Chris Driedger stopped 21 shots for his second career shutout, and MacKenzie Weegar’s assist on Barkov’s tally gave him a seven-game point streak, tying Keith Yandle for the franchise’s longest by a defenseman.

Tampa Bay used steady goaltending from Andrei Vasilevskiy’s and goals from four different scorers to cruise to a 4-1 win and sweep the two-game set from the visiting Chicago Blackhawks on Saturday.

Vasilevskiy’s 30-save performance tied him with Louis Domingue for the franchise record for consecutive victories (11) and improved his overall mark to 20-3-1. He is 10-0-0 lifetime against Chicago.

Steven Stamkos, Anthony Cirelli, Brayden Point and Yanni Gourde scored goals, while Mikhail Sergachev had two assists for Tampa Bay, which is 12-2-1 in its last 15 games and 12-2-0 at home.

Victor Hedman, who played in his 500th game earlier this week, produced three assists and said killing off a Chicago five-on-three in the second period while holding a 2-0 lead was crucial.

“That was a big kill for us, obviously,” said Hedman, whose three assists tied a team record in a period. “We weren’t happy with the way we played in the second period. (Vasilevskiy) was unbelievable. We got that kill off. We got some momentum and scored after that.”

Hedman’s three-point night made him the top-scoring defenseman with 32 points in 30 games, passing Tyson Barrie’s 30 points in 33 contests for Colorado.