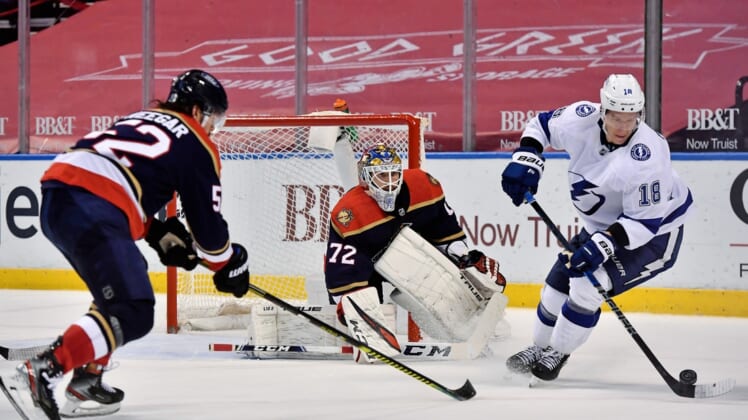 The Tampa Bay Lightning set the record straight with the Florida Panthers on Saturday night.

Two nights after being drubbed 5-2 by their state rival, the reigning Stanley Cup champions poured it on in a 6-1 rout of the Panthers to split the two-game set in South Florida.

The clubs head north to Tampa for Monday night’s game for their third straight match.

With second-line center Anthony Cirelli out of the lineup with a significant upper-body injury, coach Jon Cooper turned to a familiar face in the middle: Tyler Johnson.

A former standout center who had landed on waivers before the season opened, Johnson scored twice to cap a four-goal second period.

The four-time 20-goal scorer relished the opportunity to play center and handle the puck more often.

“It’s always tough when you lose guys, but it felt good back in the middle a little bit and kind of getting a feel and groove,” Johnson said. “Playing with the puck a little bit more it’s always a lot more fun, so it felt good and we’ll see. I can just keep building on that and try to help the team out as much as I can.”

The only issue at stake in the third period was whether goalie Andrei Vasilevskiy would record his first shutout this season. Florida’s Frank Vatrano spoiled the Russian netminder’s bid with his third goal of the season.

“He’s a big goalie, and when he gets in that rhythm and groove he’s as good as there is in the game,” Panthers coach Joel Quenneville said. “You’ve got to find a way to get traffic in front of him … get in his face a little bit. We were a little on the outside today.”

Johnson said Thursday’s setback in which they were completely outplayed by their Sunshine State opposition was a wake-up call.

“It definitely wasn’t our best effort,” Johnson said. “We talked about it. The biggest thing was effort, working hard and staying within our structure.”

Added Cooper, “I liked everything. It was a little humbling experience the other night.”

Quenneville could turn to Chris Driedger in net on Monday as the Panthers try to break a four-way tie for second place in the Central Division and move closer to the first-place Lightning.

Two-time Vezina Trophy recipient Sergei Bobrovsky was bombarded by the Lightning’s second-period siege and slipped to 5-1-1 on the season. He yielded six goals on 28 shots in the loss.

But MacKenzie Weegar said Saturday’s disappointment wasn’t about the goaltending and more about he and his teammates’ lack of readiness to battle with the Bolts again.

“We just didn’t come to play tonight for the full 60 minutes,” the defenseman said. “They just kept taking it to us. We were expecting a big push, and they’re the Stanley Cup champions for a reason.”

“We just weren’t ready for it. Plain and simple, we didn’t have the compete tonight.”