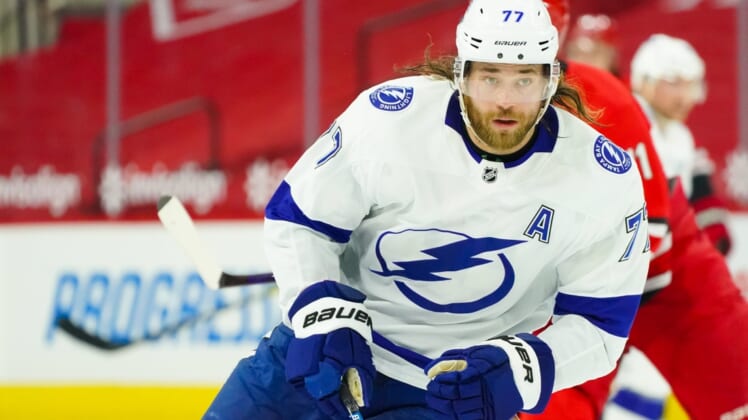 Tampa Bay coach Jon Cooper has been concerned about his team’s play recently, but the Lightning cranked their game up a notch Tuesday night in Dallas when it meant the most.

With his club up 3-1 late against the Stars, Cooper watched his side waste the two-goal advantage as Jamie Benn and Alexander Radulov tallied inside the last 2:06 of regulation.

However, rookie Ross Colton and Brayden Point netted in the shootout session, goalie Andrei Vasilevskiy stuffed Radulov in the third round and the Lightning won 4-3 to improve to 16-0-0 in games when they have led entering the third period.

Cooper and the Lightning, who share the top spot in the Central Division with the in-state rival Florida Panthers, return to the Sunshine State for a pair of home contests against the Chicago Blackhawks on Thursday and Saturday.

“I was a little disappointed in some of the way we’ve played in the past week (like) puck-management issues with our game that I think was leading us down a bad path,” said Cooper, whose squad lost 4-1 Monday at home to Nashville. “We addressed that (Monday) and today about how we need to play to have success.

“For a lot of the game, I thought that’s what we did.”

One steadying influence has been the play of defenseman Victor Hedman, who recorded his 500th NHL point when he assisted on Steve Stamkos’ team-leading 14th goal for the 3-1 advantage.

“(The 500 points) means the world,” said Hedman. “To reach milestones is always fun. That’s a big milestone and hopefully some more to come.”

Against Chicago, the defending Stanley Cup champions have been victorious in four of five (4-0-1) and hold a 22-12 goal advantage against the Blackhawks, who are 3-5-1 in their last nine games.

Chicago owned a 3-1 lead over the Panthers in Sunrise, Fla., on Monday night, but dreadful play on special teams befell the Blackhawks, who ended up losing 6-3.

Brandon Hagel’s third goal put Chicago up 3-1 at 13:02 of the second period, but defenseman Aaron Ekblad cut it to a one-goal deficit 1:56 later with Florida’s second power-play goal.

After Chicago went on a late power play at 13:11 with the game tied at 3, the Blackhawks fell victim to a stellar effort by Florida’s Aleksander Barkov, who led a strong short-handed rush that ended with his slam-dunk shorty at the doorstep for a 4-3 lead.

“What happened at the end of the night on the power play was inexcusable, and tough to explain how that happens,” said Colliton. “We’re close, but ultimately the difference was at a key moment of the game, we weren’t up to the task.”