PREVIEW: Tampa Bay Lightning looking to bounce back in Game 4 vs. Carolina Hurricanes

There were enough good stretches for the Tampa Bay Lightning despite their loss that the team remains positive going into Game 4 against the Carolina Hurricanes on Saturday in Tampa, Fla.

“You’ve got to move on and come ready for Game 4 because it’s a big one,” Lightning center Brayden Point said.

There was a shakeup for the Hurricanes, who gave goalie Petr Mrazek the start after rookie Alex Nedeljkovic played in Carolina’s first eight playoff games.

Mrazek was up to the task with 35 saves.

With a potential momentum shift in the series, it seems likely that Carolina coach Rod Brind’Amour will stick with Mrazek.

“I didn’t really know what to expect, to be honest with you, he’d been out for so long,” Brind’Amour said. “But he’s a battler.” 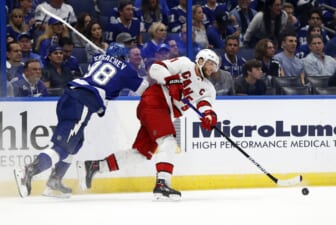 The Lightning didn’t score an even-strength goal but had plenty of opportunities after wiping out a 2-0 hole with a pair of second-period power-play goals.

Tampa Bay boosted its shot total and seemed to enjoy a good pace in Game 3.

“A lot of things that we liked,” Lightning defenseman Victor Hedman said. “We’ll take (those) with us to the next game.”

Coach Jon Cooper of the Lightning didn’t mind many facets of the game. That might set up well going forward.

“We did pretty much everything we wanted to do except for get one more goal than them,” Cooper said. “Come back with that effort again and again and again, (you) can’t ask for more.”

That’s pretty much the approach the Hurricanes have taken as well. They dropped the first two games of the series at home, both by 2-1 scores.

The Hurricanes ought to be used to overtime. Five of their nine postseason games have going into at least one extra session.

Tampa Bay dropped to 0-2 in overtime games this postseason. 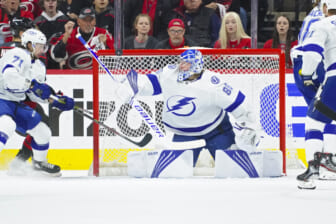 “We just have to keep going to Game 4 and just do it over and over again and trust our system,” said Hurricanes center Sebastian Aho, who had a goal and two assists in Game 3.

Mrazek said the Hurricanes shouldn’t feel stress in their situation.

“I wouldn’t call it pressure,” he said. “It’s fun to play, especially playoffs. Those moments are forever.”

Brind’Amour said it’s unclear if the Hurricanes were the better team in Game 3, but the outcome was something that was a proper reward.

“Everybody just dug in,” Brind’Amour said. “We got something we deserved — to be in the series.”

The Hurricanes lost forward Warren Foegele to an upper-body injury during Game 3. His status remains unclear. Carolina already has been without right winger Nino Niederreiter, who suffered a practice injury prior to the second-round series, and center Vincent Trocheck, who was injured in Game 2.

The result Thursday night means the Hurricanes will have at least one more home game. Game 5 is set for Tuesday in Raleigh, N.C.