From the Brooklyn Nets tripling down on the superteam concept to the defending champion Los Angeles Lakers needing to win a play-in game to qualify for the playoffs, there was no shortage of unpredictability throughout the shortened 72-game NBA regular season.

But the biggest surprise of all might be summed up in these 17 words: The New York Knicks and Atlanta Hawks are opposing one another in an Eastern Conference playoff series.

The Knicks will appear in the postseason for the first time since 2013 Sunday night, when they are scheduled to host the Hawks in the opening game of the best-of-seven first-round series.

The fourth-seeded Knicks and fifth-seeded Hawks each finished 41-31, but New York earned the higher seed and home-court advantage by going 3-0 against Atlanta.

Coaching changes helped to hasten the extensive rebuilds for both teams. Last July, the Knicks hired the no-nonsense Tom Thibodeau, a turnaround artist who might have pulled off his most impressive feat yet in overseeing a rapid culture change in New York.

Thibodeau directed the Chicago Bulls, who advanced out of the first round only once since their second three-peat ended in 1998, to the conference semifinals or beyond three times in five years before snapping the Minnesota Timberwolves’ 13-year postseason drought in his second season at the helm in 2017-18.

The Knicks were 190 games under .500 the previous seven seasons, a span in which they ranked among the bottom half of the NBA in points allowed per game five times. But under Thibodeau this season, New York allowed a league-low 104.7 points per game while finishing the season with 16 wins in its final 20 games.

Of course, for the famously dour Thibodeau, the work is just beginning.

“You don’t want to feel too good,” Thibodeau said following a 96-92 win over the Boston Celtics in the regular-season finale May 16. “You always want more.” 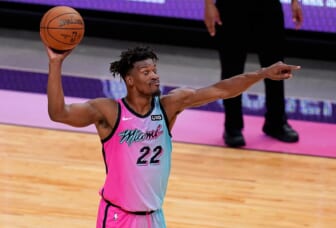 The defensive-minded Knicks will get the type of test Thibodeau enjoys against the Hawks, who tied for 11th in the NBA with an average of 113.7 points per game yet were the only team with nine players averaging in double figures.

The Hawks, who last reached the playoffs in 2017 and were 85 games under .500 the previous three seasons, didn’t begin surging until head coach Lloyd Pierce was fired March 1 and replaced on an interim basis by assistant coach Nate McMillan, who went to the playoffs nine times in 14 full seasons as a head coach with the Seattle SuperSonics, Portland Trail Blazers and Indiana Pacers.

Atlanta, which was 14-20 and in 11th place in the East under Pierce, won its first eight games under McMillan and exceeded 100 points 34 times in the final 38 games.

“This is what I came down here for, to try to help this team get to the next level,” McMillan said after the Hawks clinched a playoff berth by beating the Washington Wizards 120-116 on May 12. “These guys have stood up and accepted that. I’m just thrilled to death that I can be part of this.”