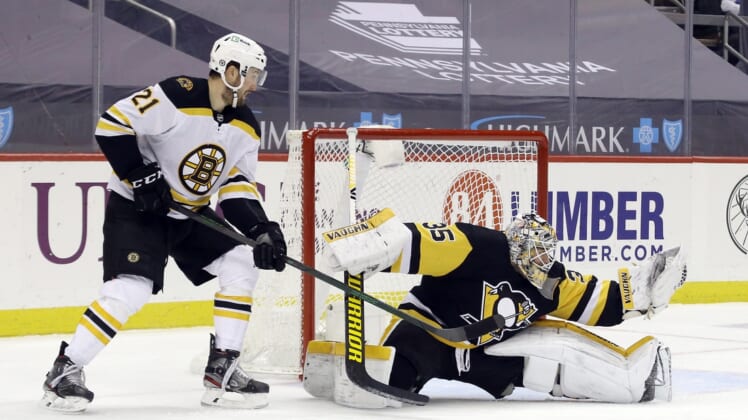 The Pittsburgh Penguins will be looking for more of the same Tuesday when they host the Boston Bruins for the second night in row.

The Penguins, who have reached the midpoint of their schedule in this shortened season, seem to have found a sweet spot in their level of play.

The Penguins have been efficient in several areas.

“I just think it’s a number of things that add up to winning, right?” Pittsburgh coach Mike Sullivan said. “Big plays at key times, managing the game the right way, getting a timely save. … For me, it’s a collective effort of 20 guys going out with one common goal.”

Boston coach Bruce Cassidy has a theory about why the Penguins have played well after an inconsistent start to the season. It has to do with motivation.

“They had a change in management,” Cassidy said of Jim Rutherford resigning as general manager in-season, with Ron Hextall replacing him and Brian Burke added in the new position of president of hockey operations. “So I think … that gets people’s attention.

“I’m sure the players are like, ‘Hey, do I like Pittsburgh? If I do, I’d better get my act together.'”

The Penguins not only will be playing on consecutive nights, but they also are entering the second contest during a stretch of five games in seven days.

“You’ve got to trust your offseason training and what you’ve done up to this point with rest and nutrition and trying to keep your body right,” Pittsburgh winger Bryan Rust said. “Lean on the strength and conditioning staff and training staff to help you get through stretches like this.”

The Bruins have lost two in a row, five of seven and are 4-7-2 in their past 13 games, largely because of a lack of offense.

Boston has scored two goals or fewer in seven of its past 10 games, one or no goals in five of seven and has been shut out twice in the past five games.

“We’re not going to sit here and tell you we’re going to be one of the highest-scoring teams until we get some more finish and more confidence,” said Cassidy, who called out his team’s effort over the weekend after a 4-0 loss to the New York Rangers.

The Bruins noticeably made shooting a priority Monday. They registered 20 shots in the first period, 33 through two periods and 43 overall, but Matt Grzelcyk’s first-period goal was all they could muster.

The tally gave Boston a 1-0 lead, but Pittsburgh responded with four unanswered goals.

“We had a pretty good attack mentality,” Grzelcyk said. “We just have to keep putting pucks to the net, keep trying to get traffic.”

Perhaps rooted in the Bruins’ frustration, the game Monday at times was chippy, with several shoving matches, something that could carry over to Tuesday.