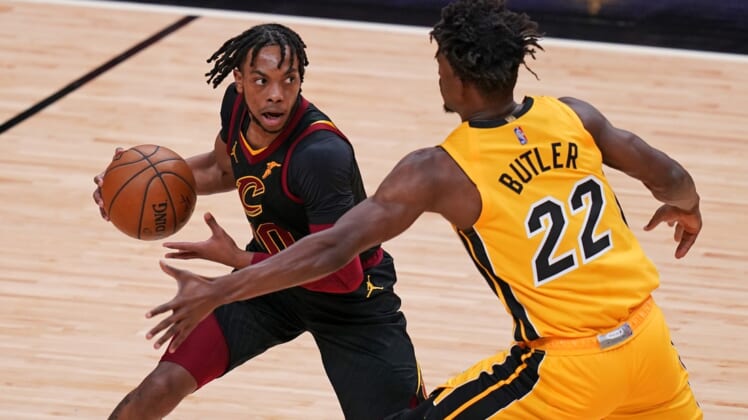 When the Miami Heat visit the Memphis Grizzlies on Wednesday night, the spotlight will be on Jimmy Butler and Ja Morant.

Miami is one of the hottest teams in the NBA with 11 wins in its past 12 games. The Heat have won five straight games, and Butler is on a streak in which he has scored at least 27 points in seven consecutive contests.

That’s one short of the franchise record held by LeBron James.

Butler had 28 points, a season-high-tying 12 rebounds, four assists and two steals on Tuesday night as the Heat defeated the visiting Cleveland Cavaliers 113-98.

“Jimmy does everything for us — scoring, rebounding, passing and even winning jump balls. That’s his new favorite thing.”

Things are not going nearly so well for Memphis, which has lost three games in a row. But Morant, who is just 21 years old, gives the Grizzlies hope for the future.

Morant, the second overall pick in the 2019 NBA Draft, is Memphis’ franchise player. He scored 44 points in the 2020-21 season opener and had 28 points in the next game before sustaining a left ankle injury that caused him to miss eight straight contests.

It was only recently that Morant has started to look that explosive again, scoring 35 points in consecutive games on March 2 and March 4.

For the season, Morant is averaging 19.6 points and 7.6 assists. In two career games against the Heat, he has averaged 17 points and seven assists.

He has proven capable of much more due to his elite athleticism and his impressive work ethic.

“The amount of film that he watches, the amount of dialogue he has with his teammates — he is building chemistry,” Grizzlies coach Taylor Jenkins said. “He is becoming a leader.”

The Grizzlies and Heat, who split two games last season, have yet to meet in this campaign.

Further, the Heat got a boost on Tuesday when 2020 All-Star center Bam Adebayo returned after missing four games due to a knee injury. In 30 minutes against the Cavaliers, Adebayo had 14 points, nine rebounds and six assists.

Adebayo, who called Butler “JimVP” in an ode to his MVP-type performances, indicated that Miami’s win streak while he was out helped him mentally.

“Everybody knows I don’t like to miss games,” Adebayo said, “but the team kept me positive because we’re winning. That made it easier for me to rehab my leg.”

The Grizzlies are hoping to get a boost of their own from shooting guard Grayson Allen, who returned on Monday after missing six games due to a concussion. He produced 15 points in 23 minutes off the bench as Memphis lost 122-99 to the Phoenix Suns.

The ex-Duke star has scored at least 20 points three times this season.