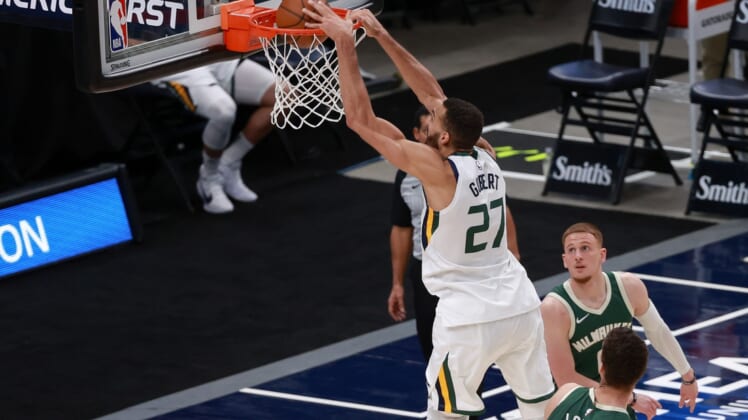 The Miami Heat began their seven-game Western Conference road trip on a positive note Thursday in Houston, beating the Rockets 101-94 for their fourth consecutive win.

It also pushed the Heat, who continue on to Utah on Saturday night, in a positive direction away from a brutal stretch in which they lost seven of eight before the winning streak began.

“We’re just gaining more and more confidence,” Butler said. “We know what we’re capable of, and we know what we want to do.”

Their resolve will be tested in a big way in Salt Lake City, as the Jazz are even hotter than the Heat. Utah enters on a six-game winning streak and has won 17 of 18.

The defending NBA champion Los Angeles Lakers are breathing down their neck in the standings, but the Jazz own the best record in the league almost two months into the season.

The Jazz’s chances will soar if they continue to get team efforts like they did in Friday’s win, during which they shot a sizzling 52.4 percent. Mitchell was one of four Utah players to score at least 25 points against the Bucks. Rudy Gobert and Joe Ingles led the way with 27 points apiece, Mitchell had 26 and Jordan Clarkson added 25.

Giannis Antetokounmpo believes the Jazz are the best team in the West.

“It just looks fun. When I watch them play, it looks easy, it looks simple,” he said. “For sure, they look like us last year.”

As a refresher, Milwaukee finished the bizarre 2019-20 coronavirus-marred regular season with the NBA’s best record (56-17) before slipping in the second round against Miami.

“That’s who we are. We are an unselfish team,” Gobert said. “Some nights one guy is going to get 30, some other nights there’s going to be two guys who are going to get 25. I believe we’re really, really tough to guard when a team’s able to have so many guys who can score and shoot the ball like that.”

It’s uncertain if the Jazz will have point guard Mike Conley (hamstring) and Georges Niang (ankle) back for the second end of their back-to-back set. Miami received some good news after the Houston win as Tyler Herro was cleared to play after sitting out Thursday’s game due to the NBA’s COVID-19 health and safety protocols.

Following Saturday’s game, the Heat continue their journey Monday in Los Angeles against the Clippers followed by games at Golden State, Sacramento and the Lakers.

Heat coach Erik Spoelstra likes how his team is grinding out close wins.

“I’ve seen some great development of mental toughness and grit,” he said. “Unfortunately, some of our best games have been losses on the road, but that develops this grit. It doesn’t happen overnight.”