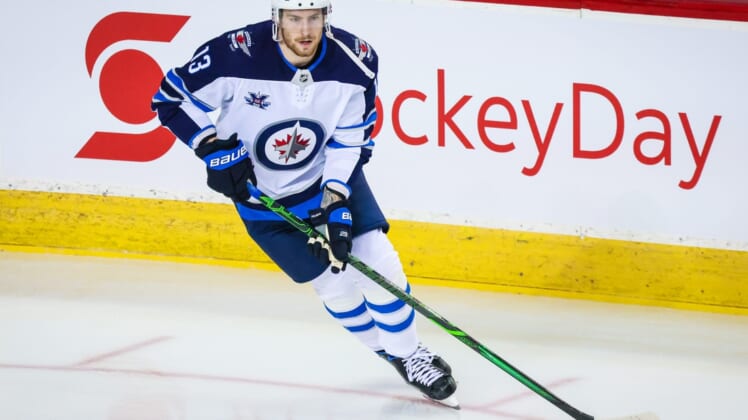 Pierre-Luc Dubois looks to make more of an impact for his new team on Thursday when the Winnipeg Jets host the Ottawa Senators.

Dubois did not register a shot on goal and had a minus-1 rating in 13:10 of ice time during Winnipeg’s 3-2 loss to the Calgary Flames on Tuesday. He was playing in his first game following a 14-day quarantine period after last month’s trade from the Columbus Blue Jackets for fellow forwards Patrik Laine and Jack Roslovic.

“I think the legs, the hands, the head, you’re trying to get everything back and felt as the game went on, I was getting some things back, but I can play a lot better than that,” Dubois said.

Jets coach Paul Maurice plans to be patient with the 22-year-old Dubois, who has recorded 159 points (66 goals, 93 assists) in 240 career games.

“The exciting part (is) he’s going to just keep getting better and better because he’s a powerful man,” Maurice said. “There looks like there won’t be holes in his game. He defended well, battled hard, made smart plays, showed some real nice finesse picking a stick in the offensive zone to open up a chance, so this guy’s going to be a big, powerful guy.

“He’ll get more ice time as we get moving forward and he gets his sea legs.”

Ehlers found the net in all three meetings with Ottawa this season, including scoring in overtime to lift Winnipeg to a 4-3 victory on Jan. 19. Ehlers collected a goal and an assist in both the Jets’ 4-1 win over the Senators two nights later and their 6-3 triumph on Jan. 23.

“(Ehlers is) gifted. … He’s got all the tools,” said Andrew Copp, who set up both of Ehlers’ goals on Tuesday. “If we can continue to get better as a line, find that rhythm, as a line we can be really dangerous.”

Mark Scheifele extended his point streak to four games (two goals, three assists) after setting up Ehlers’ second goal against the Flames. Scheifele boosted his club-best totals in assists (10) and points (15) by notching five assists and seven points in the three encounters with Ottawa last month.

The struggling Senators showed heart on Tuesday before dropping a 3-2 decision to the Edmonton Oilers, marking their third straight loss and 12th in the last 13 games (1-11-1). Ottawa held a 42-22 edge in shots, including 30-10 over the last two periods.

“I thought right from the get-go we were jumping,” Senators coach D.J. Smith said. “Third period we had a great push. I thought we were probably the better team all the way through the night.”

Evgenii Dadonov scored on a breakaway early in the third period on Tuesday for his fifth point of the season. Two of his points have come against Winnipeg, including a goal in the Jan. 23 matchup.

Offense remains a significant issue for Ottawa this season. The Senators have mustered two or fewer goals on nine occasions, including in each of the last three games.