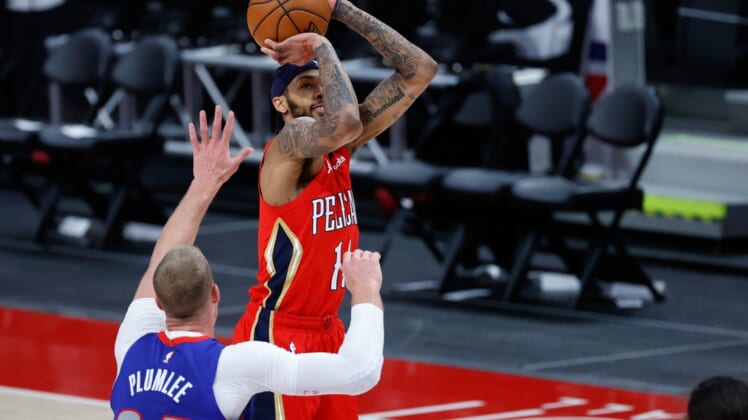 It was less than two weeks ago that the New Orleans Pelicans defeated the visiting Memphis Grizzlies 118-109.

It was the Pelicans’ third victory in what would become a season-best four-game winning streak.

But the promise that New Orleans showed during that streak has vanished as it visits Memphis on Tuesday night.

The Pelicans will be completing a four-game road trip that has featured three losses and three poor defensive performances.

Chicago and Dallas each made 25 3-pointers and scored 129 and 143 points, respectively, in double-digit wins before Detroit beat the Pelicans 123-112 on Sunday. The Pistons easily overcame a 40-30 New Orleans advantage after one quarter and ultimately made 17 of 35 3-pointers and shot 53.6 percent from the field.

“It was more than the 3s,” Van Gundy said. “We were just getting rocked off the dribble. Nobody blocked out. We just didn’t compete nearly as hard as they did.”

Van Gundy said his top two players — forwards Zion Williamson and Brandon Ingram — showed signs of fatigue. He said he will evaluate how many minutes they are playing as well as every other aspect of his personnel usage.

“I’m not saying we will make changes,” Van Gundy said, “(but) I don’t think we can, with no thought, just put the same guys out there.”

In the first meeting between the Pelicans and the Grizzlies, Memphis’ Jonas Valanciunas returned from a five-game absence due to COVID-19 protocols and scored 23 points in 24 minutes. He had 25 points and had 13 rebounds in a 124-110 victory at Sacramento on Sunday night.

It was Valanciunas’ fourth 20-point game in five games since his return, which includes three double-doubles. In those last five games, he is averaging 21.8 points and 12.6 rebounds.

“(Valanciunas) is a beast, straight up,” said forward Brandon Clarke, who returned from a four-game absence due to a sore calf to score 13 points against Sacramento. “He’s a really tough matchup for pretty much every team every night.”

Ja Morant (16 points, 10 assists), Dillon Brooks (22 points) and Kyle Anderson (17 points) also were among seven Grizzlies that scored in double figures as the team won for just the second time in seven games.

“Our guys were great up and down the entire roster,” Memphis coach Taylor Jenkins said. “Our starters set a tone for us from the start. Our defensive activity set a tone for us offensively. Our bench came in, gave us tremendous minutes. (It was) definitely one of our better games all around from start to finish.”

The Grizzlies, who have lost four straight against New Orleans, are starting a stretch of four home games in six days.

“As long as we keep making strides, keep getting better at it,” Morant said, “I feel like once we play a full 48 (minutes) of Grizzlies basketball, (we’ll be) a tough team to beat.”