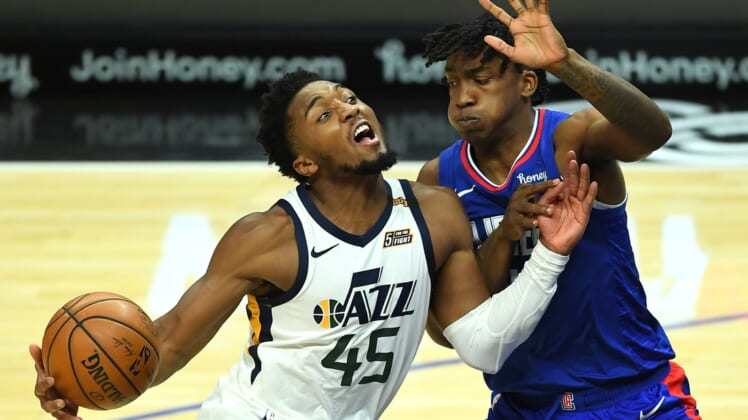 Finding different ways to win has become a Utah Jazz trademark heading into a rematch with the Clippers in Los Angeles on Friday night.

Utah rallied to beat Los Angeles 114-96 on Wednesday night in the first of a two-game set between the teams. And the Jazz did not earn their ninth straight victory through overwhelming the Clippers on the perimeter. Instead, Utah attacked the rim and turned to Rudy Gobert to give the team a lift inside.

Gobert finished with 23 points and 20 rebounds — his second 20-20 game of the season — to give some juice to a Jazz team that looked sluggish offensively for two and a half quarters before pulling ahead late in the third quarter. Utah eventually pulled away for its 18th double-digit victory in the last 20 games.

His defensive play also helped shut down a Clippers offense that fared well before halftime.

“We can’t take it for granted because he just impacts the game,” Jazz coach Quin Snyder said. “He impacts it in a lot of ways, and tonight you saw it on both ends.”

Donovan Mitchell, who finished with 24 points after missing eight of his first nine shots, credited Gobert with giving Utah a much-needed jolt. His dominance around the rim allowed the Jazz to get better looks inside and outside and get things cooking on the perimeter again in the third quarter.

“He was the aggressor,” Mitchell said. “The stats show one thing, but you look at the little things: sprinting down the floor, the tips that he had, finishing through contact, dunking the ball — that’s something that really set the tone.”

Los Angeles held its own against the Jazz for much of the game despite playing without Kawhi Leonard or Paul George. Leonard missed his third straight game due to a bruised leg. George was sidelined for a seventh consecutive game with an injured toe. Nicolas Batum, a third starter, sat out with a concussion for a second game in a row.

Lou Williams scored 16 points and Reggie Jackson added 15 for the Clippers. Still, Los Angeles did not have enough firepower to keep up with Utah once the Jazz finally clicked on offense.

“I can’t fault our effort and our competing, (but) it’s just one of those games where they played well enough to beat us, especially in the fourth quarter when they got it going,” Los Angeles coach Tyronn Lue said. “That’s why they’re the best in the league defensively, because of the way they make you play.”

The loss snapped a four-game winning streak for the Clippers. Now Los Angeles gets a second chance to take down a Utah team that is 20-1 in its last 21 games and is off to the best start in franchise history through 29 games (24-5).

The Jazz entered Thursday’s games with a two-game lead over the Lakers for the top spot in the Western Conference and are 3 1/2 games ahead of the Clippers.