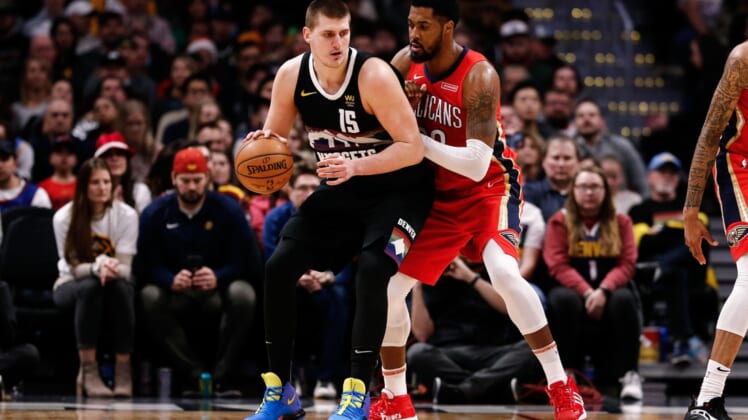 The Denver Nuggets breezed to easy victories earlier this week, so it was only natural they would bank on another one against a scuffling Chicago team on Friday night.

The Nuggets instead escaped with an overtime win, so at least the lesson of not taking a struggling team lightly came with a victory. They can see if they learned from that game when they host the New Orleans Pelicans on Sunday afternoon.

Denver has won three in a row and eight of its last nine to surge to nine games above .500 with a chance to finish its homestand with four straight wins ahead of a three-game road trip.

First, it will have to contend with a somewhat angry New Orleans team coming off two losses in Portland.

The first of those was painful, coming after holding a 17-point lead in the fourth quarter and a three-point lead late only to fall 125-124. The Pelicans are seven games under .500 and trade rumors ahead of Thursday’s deadline have only grown.

The latest is Lonzo Ball heading out, speculation that was only fueled by his father, LaVar, who said in a recent radio interview, “No, he can’t stay in New Orleans.”

For the moment the Pelicans are focusing on trying to shore up their defense, which allowed Damian Lillard to score 50 and 36 points in the losses to the Trail Blazers. They scored only 93 points Thursday night, 31 fewer than Tuesday’s output.

“When you’re struggling that much offensively, your defense has to be damn near perfect,” New Orleans coach Stan Van Gundy said after Thursday’s loss.

Being able to stop a guard from scoring is going to be an issue Sunday. Denver’s Jamal Murray, who struggled in his first couple of games out of the All-Star break, erupted for 34 points — 22 in the fourth quarter and overtime — and hit a tying 3-pointer with 0.4 seconds left Friday night.

Murray isn’t the only problem facing the Pelicans. Nikola Jokic continues to have an MVP-caliber season, adding to his credentials with 34 points, 15 rebounds and nine assists. He just missed his 11th triple-double of the season but notched his league-leading 37th double-double.

Jokic and Murray have developed into a hard-to-stop duo, which was evident on the tying 3-pointer when Jokic fed Murray for the shot.

“For five years now, especially the last three, we’ve seen that relationship just blossom,” Nuggets coach Michael Malone said. “I don’t know how many other two-man combos are as lethal in clutch situations as Jamal and Nikola are. They blew up the initial action, we stayed with it, we had plenty of time, Nikola never panicked, Jamal relocated.”

Denver has gotten big contributions elsewhere, including scoring from Michael Porter Jr. and the emergence of Facundo Campazzo’s play in the backcourt. He had a key steal in the final minutes of regulation on Friday night to help the Nuggets send it to overtime.

“I’m an emotional guy, passionate guy, I follow my emotions in the game,” Campazzo said. “I think I did that in that moment. I followed my heart and my intensity.”