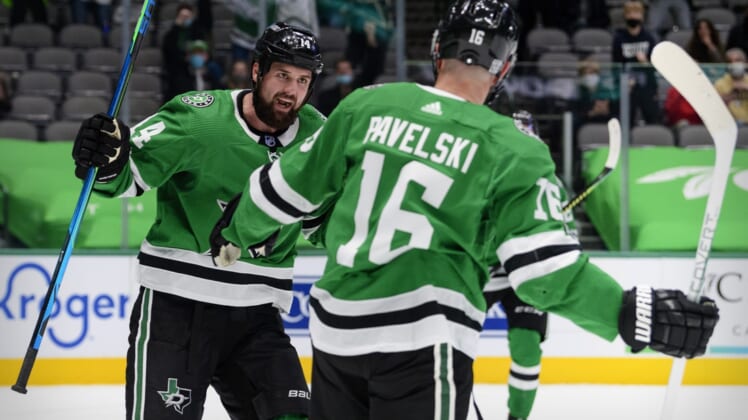 The Dallas Stars began the season showing the intensity that led them to the Stanley Cup Finals last season.

The tables have turned on the Stars, however. After starting the season by winning four in a row, they have since lost six of their last seven games (1-3-3) heading into Saturday’s encounter with the visiting Carolina Hurricanes.

While the results haven’t been favorable, Dallas coach Rick Bowness deemed that his team enjoyed the better of play during Thursday’s 5-3 setback to Carolina. The Stars held a 37-32 edge in shots and 39-19 advantage in hits.

“Our record could be a whole lot better than it is right now, but that will even itself out,” Bowness said after his team’s fourth straight loss (0-2-2). “We’ve got 45 more games and it will even out. If we keep playing like this, we’ll win more than we lose.”

Defenseman Mark Pysyk, however, was more focused on the here and now.

“In our eyes, we’re definitely, definitely not where we want to be,” said Pysyk, who scored his first goal of the season Thursday night. “I think everybody knows that there just needs to be a little bit extra from everybody.”

Centerman Joe Pavelski has done his part. The 36-year-old boosted his team-leading goal total to eight with his NHL-best sixth tally on the power play on Thursday. That matches his total with the man advantage in 67 games last season. Ten of Pavelski’s club-high 16 points this season have come on the power play.

While Pavelski has scored twice against the Hurricanes, Carolina has skated away with victories in all three meetings.

Hurricanes captain Jordan Staal has played a large role in those wins by registering five points (two goals, three assists), including a goal and an assist on Thursday. The multipoint performance was his fourth in the past six games.

“I’m getting some good bounces,” Staal said. “I felt good coming into this season. I thought I had a strong offseason. It’s nice to pop a few in early and get the confidence going.”

Nino Niederreiter scored the go-ahead tally on a breakaway 3:58 into the third period to pull even with Vincent Trocheck for the team lead in goals (six).

“Most of the lines play the same way, it doesn’t matter who you are playing with,” said Niederreiter, who has scored in back-to-back games and three of his last four. “I definitely think that’s what makes this group special.”

James Reimer made 34 saves to improve his record to 6-1-0 both on the season and in his career versus Dallas.

Conversely, Anton Khudobin has yet to regain the form that made him a postseason darling during the Stars’ spirited surge in August and September. The 34-year-old owns an 0-3-1 mark with an .866 save percentage in his last four starts, with three of those coming in losses to Carolina.

“I’m sure he’s not happy with his numbers,” Bowness said. “We know what he’s capable of doing. He’s just going to have to keep working and get back on top of his game.”