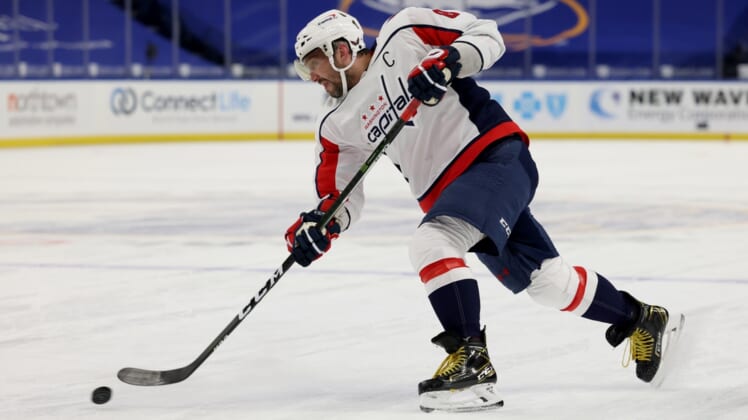 The Washington Capitals and New York Islanders are both riding winning streaks, but the Capitals extended their run in decidedly less dramatic fashion Monday than the way the Islanders did so a day earlier.

The host Capitals can move into a tie for first place in the East Division with the Islanders on Tuesday night when the teams meet for the only time this month.

The Capitals ran their winning streak to five games Monday night by routing the host Buffalo Sabres 6-0. The Islanders, meanwhile, won their ninth in a row Sunday by outlasting the host New Jersey Devils 3-2 in a shootout.

The win on Monday was Washington’s most lopsided since the Capitals blanked the Boston Bruins 7-0 on Oct. 3, 2018.

The only suspense against the Sabres involved star left winger Alex Ovechkin, who made another bit of history by scoring the final goal of the game. It was the 717th career tally for Ovechkin, tying him for sixth all-time with Phil Esposito.

“I grew up in Massachusetts watching Phil, so to be able to grow up and watch him and the player he was … he was an unbelievable player, unbelievable goal-scorer,” Capitals coach Peter Laviolette said. “Now to get a chance to work with Ovi and have these two guys sitting here at the same number is pretty, pretty incredible.”

Washington went a fourth straight game without trailing Monday. The Capitals haven’t played from behind since March 7, when they spotted the Philadelphia Flyers the first goal in a 3-1 victory.

The Islanders had a much-needed day off after a chaotic Sunday afternoon and evening.

The team took the ice minus two players after Jean-Gabriel Pageau and Noah Dobson were placed on the NHL’s COVID-19 protocol list minutes before faceoff.

Then New York squandered a pair of one-goal leads and briefly thought its winning streak ended when P.K. Subban scored 27 seconds into overtime. However, Subban’s goal was overturned because the Devils were offside.

The Devils scored first in the shootout before Anthony Beauvillier scored to force a fourth round for the Islanders, who finally won the game when Oliver Wahlstrom scored on his first NHL shootout attempt.

“I thought that was a really huge goal by (Beauvillier) when the pressure is on — if you don’t score, game over, (but) you get that goal and keep yourself alive,” Islanders coach Barry Trotz said Sunday night. “Then ‘Wally’ getting the winner.

“Not the prettiest … it was drawn-out — the longest 60-game minute we’ve had in a while, that’s for sure.”

The win capped the Islanders’ three-game sweep of the Devils, and it came without captain Anders Lee, who was hurt in the first period of a 5-3 win on Thursday. Kieffer Bellows, promoted to the first line in place of Lee on Saturday, scored twice in the third period to complete a 3-2 comeback victory.

Pageau was removed from the COVID-19 list Monday and is expected to return to the lineup Tuesday. Dobson remained on the list.