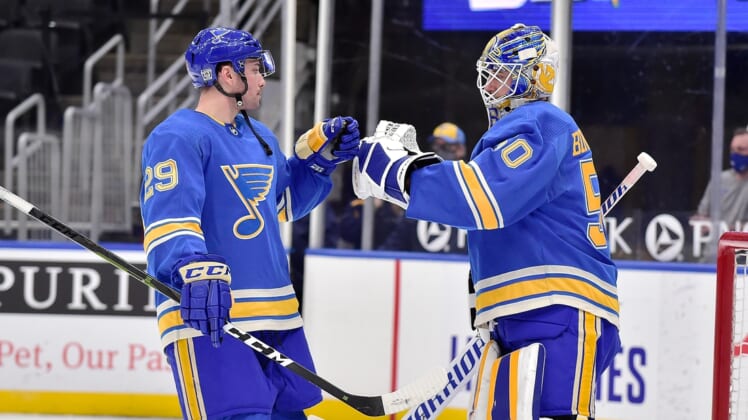 The St. Louis Blues hope to tighten their defense when they visit the Anaheim Ducks on Saturday.

Meanwhile, the Ducks will seek more offense during the first of back-to-back games between the teams at Honda Center.

This West Division set pits the NHL’s lowest-scoring team this season against one of the league’s most porous defenses.

The Ducks averaged a league-worst 1.75 goals in their first eight games. Opponents have outshot them 98-55 in the past three contests.

“It’s frustrating, for sure,” Ducks winger Jakob Silfverberg said after his team fell to the Arizona Coyotes 3-2 Thursday night. “When we feel like it’s maybe not them doing their best, rather it’s us shooting ourselves in the foot.”

Anaheim opened the season with a 0-for-17 power-play slump before Danton Heinen finally broke through with the man advantage against the Coyotes.

But that wasn’t enough to propel the Ducks to victory.

“You’d like to at least grab a point if you can’t get the win, and with that power-play goal, we were excited to finally get one in the net,” Anaheim coach Dallas Eakins said. “So it’s a pretty empty feeling right now.”

The Blues are coming off a wild, 5-4 shootout road victory over the Vegas Golden Knights Tuesday night. The NHL postponed their Thursday rematch against due to a COVID-19 outbreak within the Golden Knights.

“I think it starts in the offensive zone, personally,” Blues coach Craig Berube said. “Forechecking, reloading, breaking plays up. That’s where it all starts. And we’ve played some games like that this year, where we’ve given up in the 20s in shots.

“And that’s where we want to be. That’s where we’ve been the last two years and we gotta get there. But we’ve got new players and it’s just a new year. So we gotta keep hammering away at it and get it right.”

The Ducks have remained competitive thanks to the strong play of goaltender John Gibson (3-2-2, 1.87 goals-against average). The Blues have survived their shaky start despite putting extra pressure on Binnington (4-1-1, 2.74 GAA).

The Blues were short-handed 36 times in their first seven games and they allowed 11 power-play goals, which were the most in the NHL through Thursday’s games.

“Right now, we’re a little bit loose,” said center Brayden Schenn said, who leads the Blues with four goals. “Not tight enough defensively in all three zones and it’s allowing them to get a lot of chances. We’re relying on our goalies, and in the games that (Binnington’s) played, definitely too, he’s making save after save. Big saves and timely saves — and we just gotta be able to help him out a little more.”