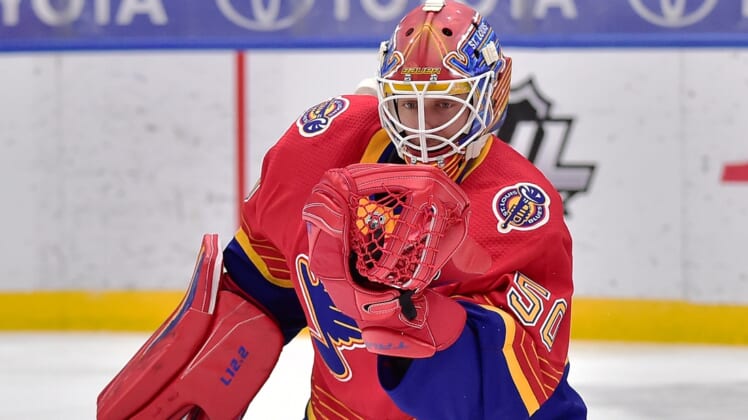 The St. Louis Blues will seek to continue their excellent road work when they visit the Los Angeles Kings on Friday night.

The Blues won their first three games on their six-game West Coast trip, 7-6 over the San Jose Sharks and 5-4 and 3-2 over the Anaheim Ducks.

Overall, the Blues are 9-2-0 away from home this season. They will face a Kings squad looking to snap a three-game losing streak.

After the Kings won six consecutive games — including 3-0 and 2-1 victories over the Blues last week in St. Louis — they lost twice to the Minnesota Wild on the road and to the Arizona Coyotes on Wednesday night at home.

The Kings battled back to force overtime in their 4-3 loss to the Wild, then they rallied against the Coyotes before losing 3-2.

“There’s the other side of the equation: 3-0 Minnesota, 3-0 Minnesota, 3-1 Arizona,” Kings coach Todd McLellan said regarding falling behind the last three games. “It’s great that we have that trait of crawling back and playing hard, but why are we getting to three on the wrong end of the stick so quick? We’ve got to figure that part out.”

McLellan said the Kings must do a better job with their breakouts.

“Opportunities to move the puck out of our zone, advance it even 10 or 15 feet and get the momentum going the other way, we were just slow again with pucks,” he said after the Arizona game. “We spent the last two days in practice trying to pick the pace up with puck movement, and coming out clean, and it bit us again tonight.”

The Kings will also focus on their penalty killing ahead of their two-game set against the Blues. The Kings allowed two short-handed goals by the Coyotes while the Blues scored three power-play goals Wednesday against the Ducks.

The Blues previously had been just 9-for-67 with the man advantage this season. What changed?

“I think it was just our attack mentality was much better,” Blues defenseman Torey Krug said. “Get the puck on and off your stick, and if we know the puck is going toward the net, we can converge. That’s just been the key. Switching up our mentality a little bit. Nothing really X’s and O’s wise, no special plays, just the mentality.”

The Blues could get winger Vladimir Tarasenko back during one of their games in Los Angeles. Tarasenko, who has scored 33 or more goals five times in his career, has been sidelined all season while recovering from shoulder surgery.

In his absence, other forwards have had to step up — including Zach Sanford, who has six goals in his last nine games.