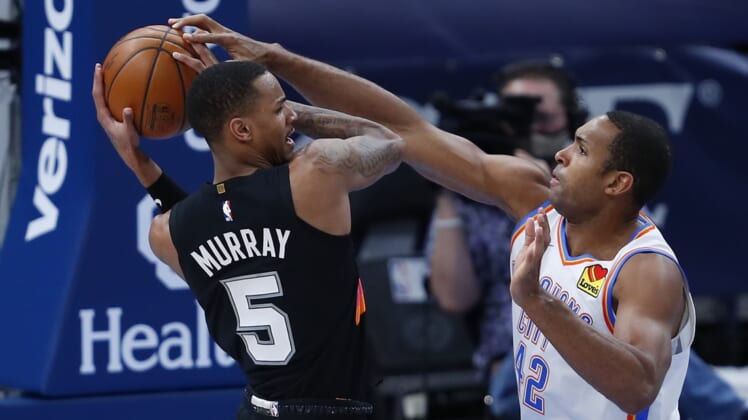 The surprising San Antonio Spurs look to end the first half of the crazy 2020-21 season on a high note when they host the road-weary Oklahoma City Thunder on Thursday.

The Spurs bring plenty of momentum into Thursday’s game after rolling past the New York Knicks 119-93 on Tuesday. Trey Lyles scored a season-high 18 points for San Antonio in the win, becoming the ninth Spurs player to lead the team in scoring this season.

Dejounte Murray added 17 points for the Spurs in the win Tuesday, which was their seventh in their past 10 games. Patty Mills and Luka Samanic scored 14 each, Lonnie Walker IV hit for 11 points, and DeMar DeRozan contributed 10 points and 11 assists in the victory over the Knicks.

San Antonio racked up 31 assists to just eight turnovers, poured in 18 3-pointers, and scored 68 points in the second half on tired legs in the second game of a back-to-back against teams from New York.

“The second half I was even shocked myself,” Murray said after the win over the Knicks. “I was looking up at the score, seeing us taking off, getting stops and hitting shots. It was great to see — it was a great team win, a team-effort win from the first guy all the way down.”

The two teams split their first two games this year, both of which were played in Oklahoma City. The Spurs won 112-102 on Jan. 12, and the Thunder squared the season-series with a 102-99 victory on Feb. 24.

Murray is looking forward to the rematch against Oklahoma City.

“We owe them, OKC, we owe them,” Murray said. “It’s really important to get this win. They beat us last time, so I really, really want this win.”

The Thunder head to the Alamo City for the second game of a road back-to-back after losing to red-hot Dallas on Wednesday. It was Oklahoma City’s second straight loss after two wins.

The Thunder were down by just three points with 7:36 to play in the third quarter on Wednesday but were outscored 18-2 over the ensuing five and a half minutes and trailed 75-61 heading into the final period.

Oklahoma City has had a series of back-to-backs over the past few weeks — Thursday’s game completes its third two-games-in-two-nights set since Feb. 21.

Some of those scheduling challenges have been caused by the need for limited travel created by COVID-19, but you won’t hear Thunder coach Mark Daigneault complain about the situation.

“We’re at no competitive disadvantage from any other team in the NBA but this year is particularly mentally trying on, especially on the players, and I think that’s something that’s a little bit understated,” Daigneault said.

“At the end of the day, it is what it is. And we’re going to always look at these things as an opportunity and try to not make excuses. Fortunately we have a team that embraces that mindset.”

San Antonio owns a 97-79 edge in the all-time series against Oklahoma City.