PREVIEW: Sooners next on unbeaten and top-seeded Gonzaga’s path 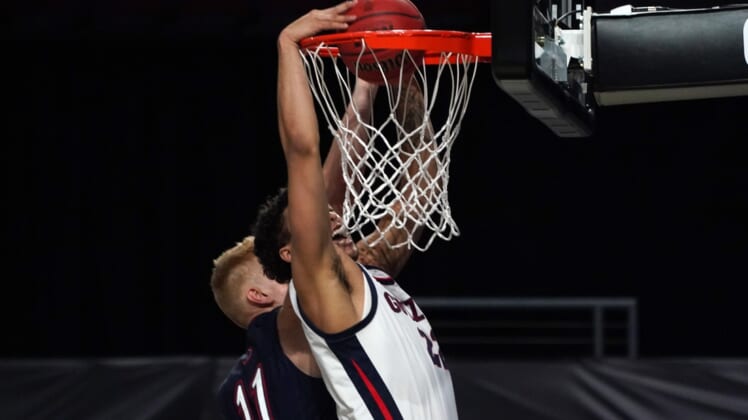 Top-ranked Gonzaga has one step out of the way in its pursuit of its first national title.

The Bulldogs will attempt to take another on Monday when they face eighth-seeded Oklahoma in a NCAA Tournament West region second-round game at historic Hinkle Fieldhouse in Indianapolis.

The Sooners (16-10) recorded a 72-68 victory over Missouri in their first-round game, while Gonzaga rolled over Norfolk State 98-55.

The steamrolling of the Spartans leaves the Bulldogs (27-0) five wins away from becoming the first undefeated national champion since Indiana in the 1975-76 season.

But Gonzaga coach Mark Few doesn’t like the repeated questions about his team possibly making history.

“We just want to win this tournament,” Few said. “As the season progressed, I think we were able to stay No. 1 all year and not take a loss. But it’s been more about really the next one coming down the pipe. As we got into this thing, I mean, we’re all highly competitive. This group’s extremely competitive. It’s just about winning this tournament.

Forward Anton Watson, who starred against Norfolk State with 17 points on 7-of-7 shooting, admits that an undefeated championship season crosses his mind. But he knows the drill: Don’t look too far ahead.

“That would be great, but we got to take it one game at a time,” Watson said. “We got Oklahoma in two days. I think that’s what I’m focused on right now. But I think the main goal is to try to win it all. Being undefeated, that would be even better.”

All-American forward Corey Kispert was on his game against Norfolk State. He made six 3-pointers and scored 23 points as Gonzaga won its 31st consecutive game.

The Bulldogs have won 24 consecutive games by double digits as they face an Oklahoma program attempting to reach the Sweet 16 for the first time since 2016 when it reached the Final Four before losing to eventual national champion Villanova.

Oklahoma will be without second-leading scorer De’Vion Harmon for the second straight game due to a positive COVID-19 test. Harmon, a sophomore guard, is averaging 12.9 points, 3.4 rebounds and two assists in 25 games (23 starts) this season.

Shortly after the victory over Missouri concluded, Harmon was celebrating with his teammates on FaceTime.

“There’s nothing better in sports than a spontaneous locker room celebration,” Sooners coach Lon Kruger said. “You can’t practice them, you can’t express how they feel — the look of satisfaction on the players’ faces, and they had De’Vion on FaceTime while that was going on and, like, he had the biggest smile.

“Just always glad that the players can experience as many of those as possible.”

The victory was just the second in the past seven games for Oklahoma, which struggled down the stretch in the highly competitive Big 12.

Reaves said the time to recover and improve is now.

“It’s March. Crazy things are going to happen,” Reaves said. “You lose now, you go home, you think about all the things you could have done, should have done, and stuff like that. But now we get to stick around and play another game on Monday.”