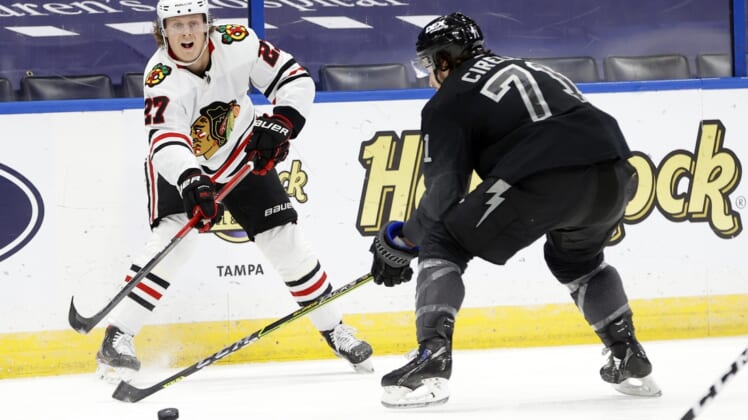 After slogging through a six-game trip, the Chicago Blackhawks hope a six-game stay at the United Center can help spark a turnaround.

If the Blackhawks want to keep pace in the Central Division playoff hunt, they’ll have to rally.

Chicago enters Tuesday night’s game against the visiting Florida Panthers on a four-game losing streak. The Blackhawks were outscored 26-13 while going 1-5 during its trip to Dallas, Florida and Tampa Bay.

“We needed a lot more points than we got,” Chicago’s Adam Boqvist said. “It was a long road trip, but I think overall we played pretty decent. But against these good teams, you’ve got to find a way to win every battle, forecheck hard and just put pucks in the net. That’s how you’re going to win games. Obviously, it’s going to be good to go home.”

The Panthers, who have won five of their past seven games, have defeated the Blackhawks twice during that stretch, 4-2 on March 13 and 6-3 on two days later, winning both times on home ice.

Florida is coming off Sunday’s 5-3 road loss to the division-leading Tampa Bay Lightning, who lead the Panthers by four points.

Sergei Bobrovsky stopped 19 shots to keep Florida afloat, but the Lightning outscored the Panthers 3-1 in the third period, including a tiebreaking power-play goal by Tyler Johnson, to pull away.

“It’s one of those games where you play these guys, it’s going to be tight,” Florida’s Keith Yandle said. “I really liked our effort. I thought we worked hard and played hard for 60 minutes. Obviously, there’s points in the game where you can learn from and get better from, and I think we’ll do that and move on to Chicago.”

The visit to in-state rival Tampa Bay opened a five-game trip for the Panthers that features two games in Chicago and two in Dallas.

Aleksander Barkov has 10 points in his past six games for the Panthers. Florida is 9-0-1 this season in games following a loss.

For the Blackhawks, a bounce-back effort figures to start with resurgent veteran forward Patrick Kane, who ranks third in the league with 42 points, as well as Alex DeBrincat, the club leader in goals with 16.

Chicago is seeking its first win since March 11 at Dallas. The team hasn’t netted consecutive victories since Feb. 23 and 25 at Columbus.

“Losses are always frustrating,” Chicago’s Connor Murphy said. “Just when you have a few in a row, it does seem to feel heavier than earlier in the season when maybe it’s just one here and there. That’s something that’s going to be the nature of it. That’s the challenge, and the really important part is to take positives.

“You never want to go into a game thinking about anything negative that happened before. It’s just one of those things with the league; you’ve got to be able to turn the page as quick as you can. … Playing confident is the only way you’re going to win. It doesn’t help to allow any loss to weigh on you going into future games.”