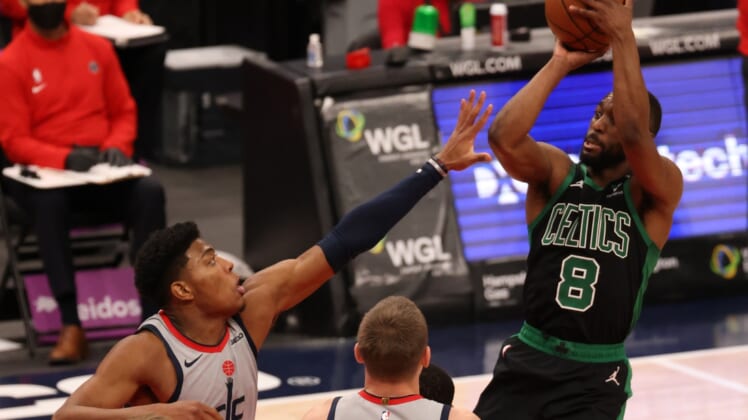 The fast start by the Boston Celtics has long faded, and a team that was considered a contender to win the Eastern Conference is .500 and mulling trade options as the deadline approaches.

It isn’t exactly an ideal scenario for Boston heading into a home game against the Denver Nuggets on Tuesday night. The Celtics have lost 10 of their last 15 and two straight to teams that are at the bottom of the conference standings.

The remedy, Kemba Walker said, is to play harder.

“That’s it. We’re not playing hard,” he said after consecutive losses to the Washington Wizards and Detroit Pistons. “We’re not playing as hard as we know we can. When you play hard, great things happen. And right now, it just hasn’t been consistent, our play. So like I said, we’re going to continue to watch film and learn from our mistakes and get better.”

Boston might want to fast track solutions with Denver coming to town. The Nuggets have won three in a row, including a 17-point win over the Los Angeles Lakers on Sunday night despite missing four players.

Gary Harris (left adductor strain) made the trip and is expected to return to the lineup soon, although he may not play against the Celtics. PJ Dozier (hamstring) will likely miss a few more games, Will Barton didn’t play Sunday for personal reasons and Paul Millsap missed the second half with a left knee sprain.

Denver, despite being banged up, beat the defending champs thanks to its stars and a couple of rookies. Nikola Jokic had his sixth triple-double in the win, Jamal Murray had 25 points and Zeke Nnaji (16 points) and R.J. Hampton have been getting consistent minutes.

Nnaji’s career night was needed after Millsap went down and JaMychal Green was limited because of foul trouble.

“They are getting a chance to play right now because of injuries to Gary, injuries to PJ, Will Barton not being with the team, Paul Millsap, obviously not playing in the second half,” coach Michael Malone said. “What it speaks to though is R.J., Zeke, all of our young guys are staying ready. In this business, you never know when your number is going to be called and you better be ready when it is called. That’s what I’m proud of most.”

“He is shooting the ball really well,” he said of Nnaji. “That is something we need. He was really good defensively. He is still learning, he is still a rookie, but I think we can help him a lot when we play together.”

The Celtics, who haven’t had Marcus Smart for the last two weeks because of a strained left calf, need to play together to turn things around before the season gets too deep.

“It’s up to the mentality of everybody, how we come in every day and prepare to work,” forward Jaylen Brown said. “If you let it be a rock-bottom mentality, then that’s what it’s going to be. (If) you come to play, then it’ll show. And today, we weren’t very good.”