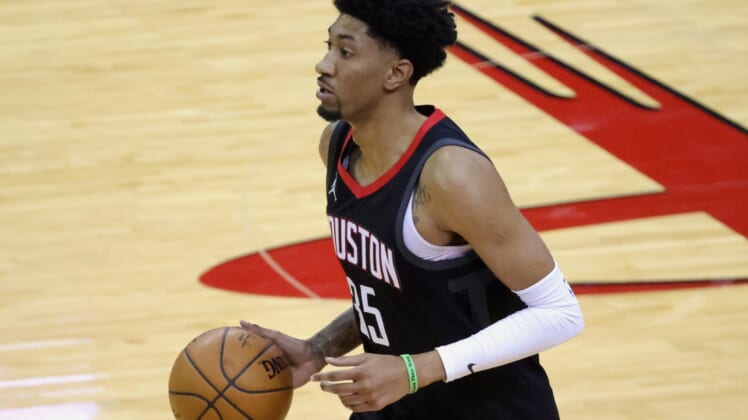 More reinforcements are on the way for the Houston Rockets as they seek to end their franchise-record, 18-game losing streak.

Christian Wood and Danuel House Jr. returned to action in a 108-94 loss to Golden State on Wednesday. Houston is hopeful the backcourt duo of Victor Oladipo and John Wall will do the same in a home game against Detroit on Friday.

Making his first appearance since Feb. 4 after recovering from an ankle injury, Wood scored 21 points and snared nine rebounds in 26 minutes.

House, who hadn’t played since March 1 due to a right knee contusion, contributed 11 points in 24 minutes.

Wood, who was acquired in a sign-and-trade with the Pistons during the offseason, is averaging 21.9 points and 10.2 rebounds.

“He’s a difference-maker,” coach Stephen Silas said. “Obviously, he can score, rebound and block shots. It really kind of changes who we are. For him, it was a good start.”

Oladipo was rested on the second game of a back-to-back. He scored 34 points against Atlanta on Tuesday.

Wall hasn’t played since March 3 due to a left knee contusion.

Houston dressed only nine players against the Warriors.

“To have Christian out there, to have Danuel out there and likely to have Victor and hopefully to have John, we’ll be as close to whole as we can be,” Silas said. “It’ll be good because (Wednesday) it was hard trying to manage minute restrictions (on Wood and House) and we had nine guys.”

With Oladipo, Wall and Kevin Porter Jr., who has averaged 19.6 points and 8.0 assists since being called up from the G League, the Rockets will have three high-scoring guards to complement Wood inside.

Silas cautions that it will take time to build chemistry.

“The thing I want everybody to understand is it’s not going to be automatic, that we’re just going to be all in sync and everything’s going to be perfect now that we have those guys,” he said. “Those guys haven’t played much together or at all. We can’t just rest on the fact that we have a full roster.”

Detroit snapped a four-game skid with a 116-112 victory over Toronto on Wednesday.

Rookie Saddiq Bey piled up 28 points, including two clinching free throws, and 12 rebounds. Bey has outperformed expectations as the 19th pick in the draft, which was acquired from Brooklyn in a trade.

“He’s a sponge,” coach Dwane Casey said. “You almost have to keep him out of the gym as far as working on his game. He’s just a solid pro and he’s going to be a star in this league for a long, long time.”

The rebuilding Pistons may have already found their starting forward pairing for years to come in Bey and Jerami Grant. The latter has emerged as a go-to scorer after being acquired in a sign-and-trade with Denver. Grant had 23 points against the Raptors, including a step-back jumper in the closing seconds with Detroit up just two points.

The Pistons’ victory was their first since the All-Star break.

“It felt great to get a win; it’s been a rough stretch coming out of the break,” center Mason Plumlee said.