Sportsnaut
Jun 11, 2021; Atlanta, Georgia, USA; Philadelphia 76ers center Joel Embiid (21) is greeted by teammates as he leaves the game against the Atlanta Hawks near the end of the second half of game three in the second round of the 2021 NBA Playoffs at State Farm Arena. Mandatory Credit: Dale Zanine-USA TODAY Sports

Philadelphia 76ers coach Doc Rivers has yet to reveal his hand ahead of Monday’s Game 4 of the team’s Eastern Conference semifinal series against the host Atlanta Hawks.

Rivers, after all, will need to shuffle the deck in relation to his starting lineup after three-time NBA champion Danny Green sustained a strained right calf during Philadelphia’s 127-111 romp over Atlanta on Friday. 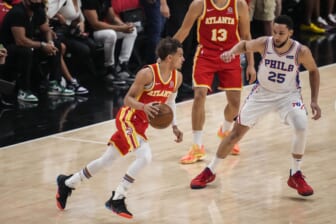 Also Read:
3 reasons Atlanta Hawks can bounce back after Game 3 loss to 76ers

Matisse Thybulle initially replaced Green after the latter was injured in the first quarter on Friday, however Furkan Korkmaz saw extended minutes and finished with a career playoff-best 14 points.

“I don’t think there’s any better motivation than starting the game, because you know you need to set the tone with the starters and you need to be good,” Korkmaz said. “That makes you motivated, and I like to play with the first unit, too. I’m really used to it, and I don’t think it’s going to be so hard for me to adjust. I’ve been doing that all year. I’m excited about it, but also, from the other side, I hope Danny is going to recover.”

To Korkmaz’s point, he started 11 games in the regular season — including the three missed by Green.

Embiid is averaging 35.3 points, 10.3 rebounds and 4.7 assists over the first three games of this series, all while playing with a small right lateral meniscus tear. He also gave Sixers fans some anxious moments following a pair of awkward falls on Friday.

Embiid finished with 27 points on Friday and Tobias Harris added 22, extending the latter’s streak of 20-point performances to a career-best six in a row.

For Atlanta to even the series, it’s going to need to improve its 3-point shooting. The Hawks made a franchise playoff-record 20 shots from beyond the arc in the series opener before totaling 17 in the next two games.

Star guard Trae Young said he wasn’t putting too much stock in the Hawks’ struggles from 3-point range after they made just 6 of 23 attempts in Game 3.

“I’m never concerned,” Young said. “This team, these guys have worked too hard to feel down about their shot. I’m not down or worried about guys’ shots. They’re going to fall eventually, I know they will. We got to keep shooting them, keep playing with confidence out there.”

The 6-foot-1 Young also has had to contend with Ben Simmons, who finished second in the NBA Defensive Player of the Year voting to Utah Jazz center Rudy Gobert. Young has made just 15 of 33 shots from the floor over the last two games, with the 6-11 Simmons routinely being tasked to guard him.