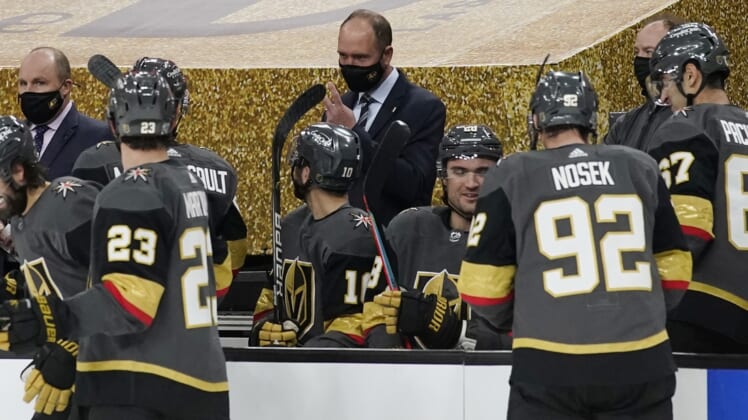 The San Jose Sharks are finally set to open their home season Saturday afternoon, when they host the Vegas Golden Knights, after playing the entire first month of the season on the road.

These division rivals were originally meant to kick off their season series on Feb. 1 and 3, but both games were postponed due to COVID-19 concerns within the Vegas organization and safety protocols in Santa Clara County where the Sharks play. The Sharks have played 12 games since opening Jan. 14, all on the road.

In addition to both teams being fired up after suffering losses in their respective games Thursday night, Saturday’s meeting will be the first of the season between the Sharks and Knights, who have developed a contentious history in recent seasons, including an exhibition game in 2019 that consisted of 114 penalty minutes. Vegas won three of the four regular-season matchups with San Jose during the 2019-20 season and outscored the Sharks 13-5.

Saturday will also be Vegas coach Peter DeBoer’s first game in San Jose since being let go from the Sharks’ organization in December 2019. DeBoer registered a 198-129-34 record in 361 games behind the bench for San Jose and coached the Sharks to their first ever Stanley Cup Finals appearance in 2016.

While the Sharks are no doubt happy to finally be playing on home ice, they are also looking to rebound from a rough 6-2 loss to the Los Angeles Kings on Thursday.

“Tonight just wasn’t good enough, and that didn’t have anything to do with being on the road,” San Jose captain Logan Couture said after the game.

Although Tomas Hertl put up a two-goal effort Thursday, Sharks’ netminder Martin Jones gave up six goals on 26 shots before being pulled in the third period. San Jose coach Bob Boughner did not mince words regarding Jones, who could be back in net against the Golden Knights on Saturday with goalie Devan Dubnyk listed as day-to-day with a lower-body injury.

Vegas is looking to meet its own standards after being blanked by the Anaheim Ducks 1-0 on Thursday. It was the Knights’ first home regulation loss of the season and the first home regulation loss for netminder Marc-Andre Fleury, who got tapped to start at the last minute after fellow goalie Robin Lehner was sidelined with an upper-body injury he sustained in morning skate.

“Unfortunate to waste an effort like that. He was our best player,” DeBoer said of Fleury, who made 27 saves in the loss. “Considering the circumstances — he got the call to go in late tonight — it was a great effort by him. I know the guys feel like they let him down tonight.”

In 12 meetings all-time, the Golden Knights have an 8-1-3 record against the Sharks.