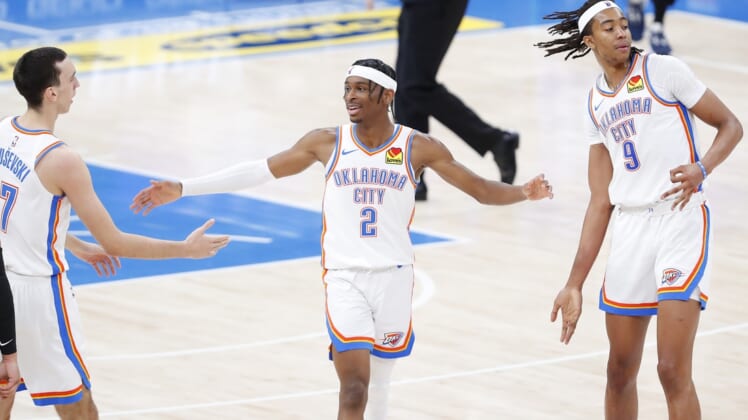 Shai Gilgeous-Alexander has reached the 30-point plateau in each of the last three games in which he has played.

Gilgeous-Alexander looks to continue his torrid play on Tuesday when the Oklahoma City Thunder begin a four-game road trip against the Chicago Bulls.

The third-year guard returned from a one-game absence due to a quad contusion to score 30 points in the Thunder’s 128-122 victory over the Memphis Grizzlies on Sunday. The win was the third in four games for Oklahoma City.

Gilgeous-Alexander also eclipsed the 30-point mark in his last meeting with the Bulls, collecting a then-career-high 33 points and 10 assists in the Thunder’s 127-125 victory on Jan. 15.

Aleksej Pokusevski scored just five points in 12 minutes of action in that contest. However, the 19-year-old erupted for a career-best 23 points on Sunday. He made 7 of 13 shots from the floor and 5 of 8 from 3-point range to become the second-youngest player in NBA history to make that many shots from beyond the arc in a single game.

“My teammates believe in me,” Pokusevski said in his postgame interview with FOX Sports Oklahoma. “They keep talking to me every time I miss a shot. … When you have teammates like that, everything is good.”

Not surprisingly, the 7-foot Pokusevski came up large in the eyes of coach Mark Daigneault.

“So, the next time he takes a step back, which he will, it’s part of development and it’s a part of competition, he’ll know that he can turn a corner. I think when you repeat that process and you keep getting those experiences, that’s where consistency and confidence come from.”

Daigneault served as an assistant under Billy Donovan when the latter coached in Oklahoma City. Now, Donovan is concerned with having the Bulls follow up their 118-95 victory over the Toronto Raptors on Sunday.

Donovan shuffled the deck and inserted veterans Thad Young and Tomas Satoransky into the lineup in place of Wendell Clark Jr. and Coby White. Young and Satoransky each scored 10 points while Clark had 13 and Carter 12 for Chicago, which saw nine players reach double digits in the win.

“It has nothing to do with Coby and or Wendell. It really doesn’t. It has more to do with how that group was playing. And I think there were some lapses in some of the games,” Donovan said. “… But I just didn’t like the way it looked coming back with a healthy team. And I feel like I wanted to try to find combinations of players playing together that could be effective.”

Zach LaVine, who averages team-high totals in points (28.1) and assists (5.1) per game, scored just 15 points versus the Raptors. The total was his second lowest of the season, but that wasn’t a concern for Donovan.

“I really respected and appreciated the way he played,” Donovan said of LaVine. “He played the right way. He scored some points late, but sometimes you’ve got to give yourself up to the team. They really made a conscientious effort to triangle-and-two him and Lauri (Markkanen), which was fine because it was leaving other guys open. Other guys got shots; different things were open for us. I think what would have been bad for us tonight if Zach would try to force it.”

LaVine erupted for 35 points on 11 of 19 shooting — including 8 of 14 from 3-point range — in the first encounter with the Thunder.