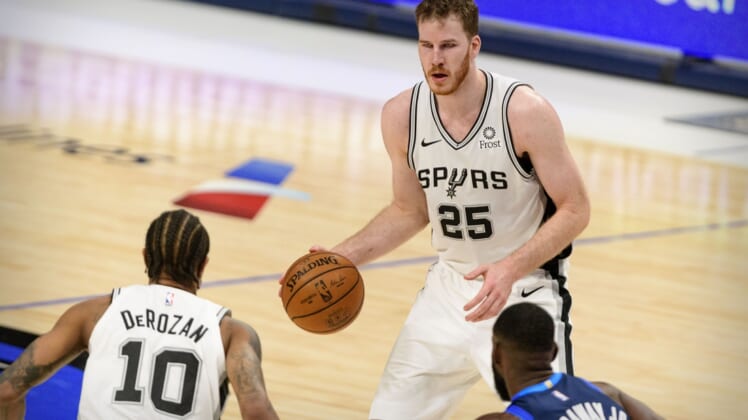 The San Antonio Spurs have traveled well throughout the season, save for a 35-point shellacking to begin their current five-game road trip.

The Spurs answered that setback by recording two straight victories to gain momentum entering Friday’s clash at the Cleveland Cavaliers.

San Antonio benefited from a spirited fourth-quarter performance to post a 106-99 victory over the Chicago Bulls on Wednesday. The Spurs scored 39 points in the final stanza, with a decision to employ a defensive press aiding San Antonio’s comeback.

“It’s not even about getting steals out of it. It’s more about getting us going on defense and maybe speeding them up, forcing them to take a bad shot or two,” said Jakob Poeltl, who collected a career high-tying 20 points and personal-best 16 rebounds.

“I think that’s really what got us going, got us to play more physical on defense. As a result of that, we got better rhythm shots on offense, and they started falling.”

Derrick White scored nine of his 17 points in the final quarter for San Antonio, which improved to 11-6 on the road this season.

The Spurs continue their trek in Cleveland, a game that was rescheduled after the teams’ initial contest on Feb. 17 was postponed because of COVID-19 issues.

The Cavaliers opened a dizzying stretch of four games in six days with a 117-110 victory over the Boston Celtics on Wednesday. The win snapped a four-game losing streak for Cleveland.

“They stayed poised,” Bickerstaff said of Sexton and Garland. “They never got sped up, they never got frustrated, they kept their composure, they thought the game (on Wednesday). They read what the defense was doing and then they made the right plays from there.”

Speaking of the youth movement, rookie Isaac Okoro added a career high-tying 15 points. The fifth overall pick of the 2020 NBA Draft has scored in double figures in 10 of his last 18 games, which represents quite a contribution from a player known more for his defensive skills.

“There are people worried about his offense, and that’s a fair concern. But not anybody in this locker room,” Larry Nance Jr. said. “He’s a rookie that has to guard every single night. Take your pick, you get to guard (Boston’s) Jayson Tatum or Jaylen Brown. The next game we play the Spurs, enjoy DeMar DeRozan. You got the best player every night.

“There’s no one in here that’s thinking, ‘Oh, man, he’s not scoring that much so he’s not being that effective.’ If you’re thinking that way, you’re not watching the games, you’re not watching what he does, because he’s an outstanding defensive player. And right now, that’s his focus. As it should be.

“… So, there are people concerned about his offense. Those people can kick rocks as far as I’m concerned.”

The Cavaliers swept the two-game season series in 2019-20 after the Spurs accomplished the feat in each of the previous three campaigns.