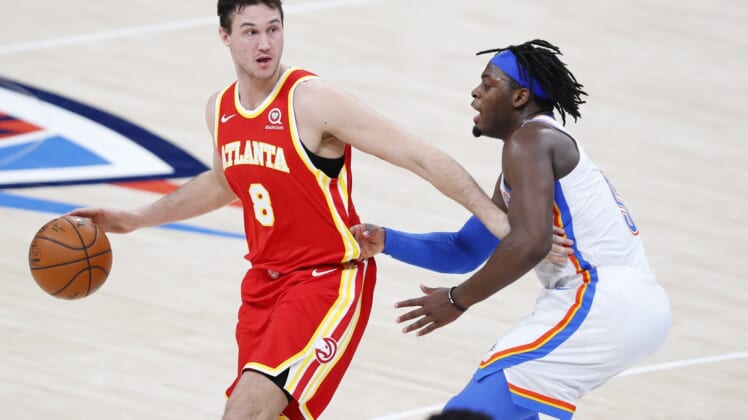 The Atlanta Hawks will try to extend their winning streak to seven games on Thursday when they host the Oklahoma City Thunder.

The Hawks defeated the Houston Rockets 119-107 on Tuesday and have won six straight for the first time since Jan. 10, 2017, the last year they made the playoffs. The Thunder were thumped 123-102 by the Chicago Bulls on Tuesday in the first game of a four-game road trip.

It will be the second game between the clubs this season. The Thunder dominated the Hawks 118-109 on Feb. 26 and have won the last two meetings.

“Of course, I’m looking at (the winning streak), but we’re just taking it one game at a time,” said Atlanta’s Nate McMillan, now 6-0 since taking over as head coach on March 1.

“My first two years in Atlanta, we definitely haven’t been .500 at this point in the season, so it definitely feels good,” Atlanta guard Kevin Huerter said. “Six in a row … Anytime you do that, it’s a good feeling. But we’ve got a tough stretch coming up.”

After Thursday’s game against the Thunder, the Hawks embark on a season-long, eight-game road trip.

The plight at center has been alleviated by the recent performance of Nathan Knight, a rookie on a two-way contract. He has totaled 31 points, three blocks and shot 69 percent over the last two games and has moved ahead of Bruno Fernando in the rotation.

The Thunder are dealing with issues, too. They played the Bulls without Luguentz Dort (toe), Darius Bazley (left shoulder contusion) and Al Horford, who was rested for the second straight game. Bazley has missed four straight games and Dort has missed the last two.

Moses Brown, who is on a two-way contract, has taken advantage of the opportunity to play. On Tuesday he became the second player in Thunder history with 20-plus points, 15-plus rebounds and five-plus blocked shots thanks to a career-high night of 20 points, 16 rebounds and five blocks. Brown, at 7-foot-2 and 245 pounds, could be a matchup problem if the Hawks are forced to start Gallinari again on Thursday.

Despite the weakened lineup, the Thunder have shown an ability come from behind this season. They have 10 wins where they’ve trailed by double digits, most recently on Sunday against Memphis.

“We’re a team that’s relentless, no matter what’s going on,” said Shai Gilgeous-Alexander. “We have guys that know how to play the right way and at all times when we step on a court we’re going to do so.”